Frogs are a diverse group of tail-less and short bodied amphibians which compose the order Anura. They form a very diverse group of amphibians with most of the members being carnivorous. Researchers believe that this species is almost 265 million years old. About 4,800 known species of frogs are scattered widely across the globe. From lush rain forests to subarctic region, diverse types of frogs are present in different regions of the world. This diversity can be evaluated from the fact that different frog types constitute approximately eighty-five percent of the extant amphibian species.

Let’s have a look at the different types of frogs in detail.

The members of Lithobates Clamitan are more commonly known as green frogs. These frogs are mid-sized, usually about 2 to 4 inches in length. Their body weight lies within the range of 28 to 85 grams. The main area where these frogs are found is around the eastern half belt of Canada and United States. Adult frogs of this species are mostly found in water, while the younger ones are more likely to be found on land, where the soil and grass is wet or moist. 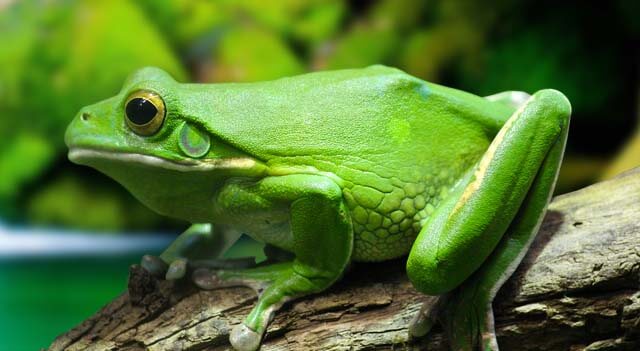 This species of the American Green Tree Frog is also known as Hyla Cinerea according to the scientific system of naming. It is considered to be a part of the species which is referred as the new world frogs. It is small-sized animal with an average length of 2 inches. This type is often found in varying body shades of light/lime green to yellow and olive. These particular frogs are often kept as a pet inside the house in an aquarium or a suitable wet/moist place in the backyard. This has led it to get the title of Georgia’s and Louisiana’s state amphibian. 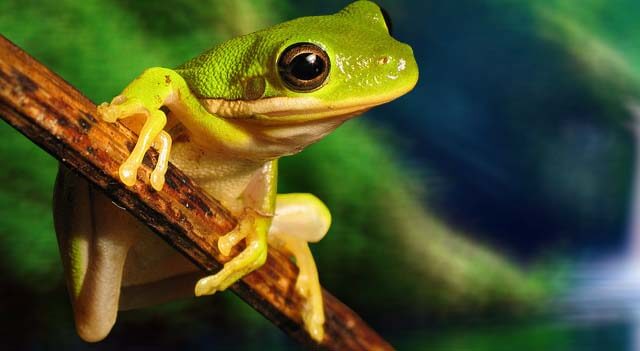 Also known as Agalychnis Callidryas, it is famous world over for its bright eyes and vibrant colors. The Red Eyed Tree Frogs are small in size, being around 2 to 3 inches. This makes them rather delicate. Their life span ranges from four to ten years. As the name suggests, this species is arboreal, meaning that its members live in trees. The hues on their body change according to the difference of their sub species as well as the area that they are found in. 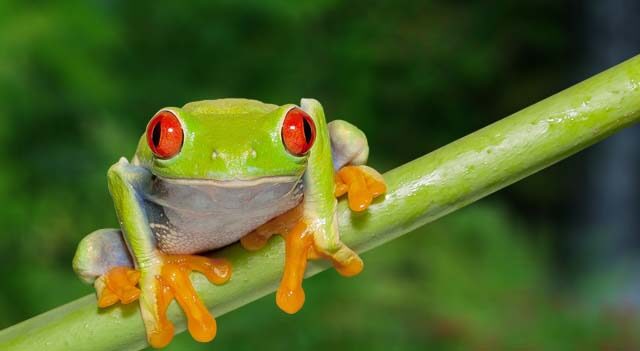 A Leopard frog is often referred to as Meadow frog. Being a member of the order Anura, they are further divided into six distinguishable categories. Physically, the Leopard Frogs are typically slim and mostly found in brown color with a spotted skin. Being carnivorous, they usually feed on tiny frogs. In addition, their big mouth also allows them to swallow small snakes, bugs and birds. They usually belong to the Northern region of the United States and the South of Canada. An interesting fact about these frogs is that it is essential for them to hibernate for at least three months. 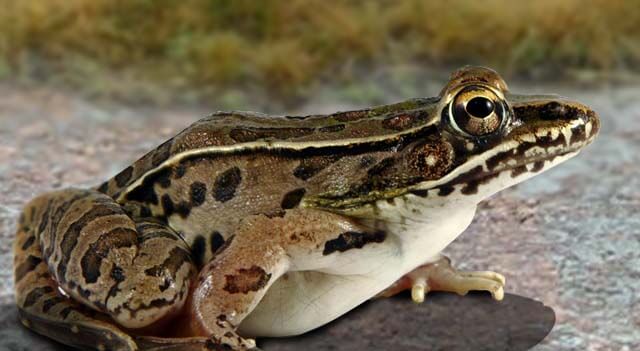 The binomial name for wood frog is Lithobates sylvaticus. Found in North America, this species is hugely spread all over the continent and is found in a vast region extending from the Southern Appalachian to the boreal forests; New York and all the way through Eastern North Carolina. They are small in size and have an average length ranging between 2 and 3 inches. Owing to their freeze tolerance ability, it is a unique species of frogs found in the Arctic Circle. In extreme cold conditions, these frogs solidify themselves as a protective measure against the chill. They eventually thaw as the temperature rises. 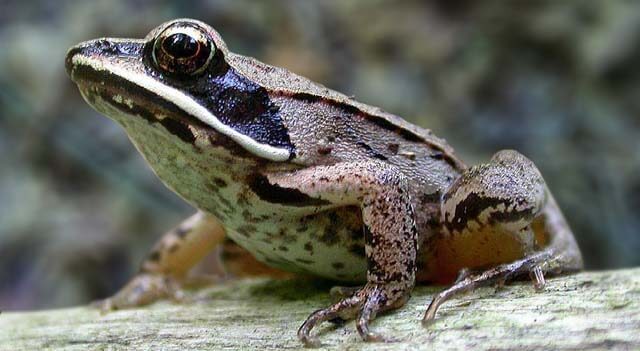 The scientific name for The American Bull Frog is Lithobates catesbeianus. It is a marine frog and belongs to the Ranidae family which is also known as the group of “real frogs”. These frogs are widely found in Western Europe, parts of Asia, Canada as well as North America. In some parts of the world, the Bull Frogs are known as an aggressive species. The male has a loud roar like sound, which gives it the title of Bull Frog. They live adjacent to water bodies. Another interesting fact about the behavior of these species is that they like to spend their lives in solitude. They only meet to mate or quarrel. 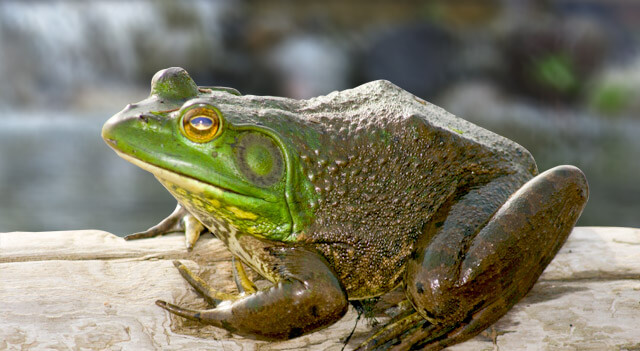 Pacman Frog gets its name due to its round shape and a very large mouth which makes it resemble the famous game character, Pacman. It is also referred as the ‘Horned Frog’ due to the presence of two horn-like fleshy buttons on top of its eyes. Pacman frogs are usually about 4 to 6 inches long. Mostly found on land, these frogs are expected to live up to ten years. In addition to South America, they are extensively found in regions of Brazil, Uruguay and Argentina. Being carnivores, they usually feed on insects and other small animals which they can swallow. 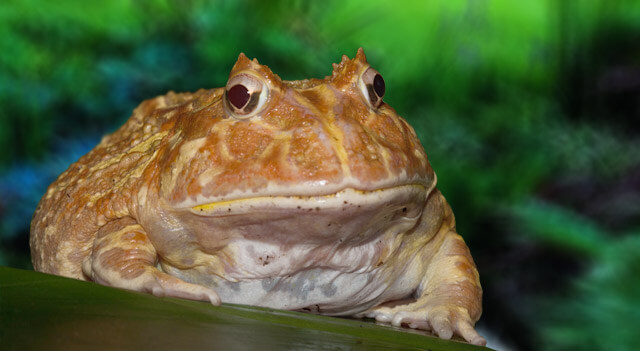 Dyscophus antongilii, or more commonly the Tomato Frog, is famous for its bright red color. Average length for these frogs is 4 to 6 inches. Mostly found on land, these frogs have some interesting tactics to protect themselves. For instance, Tomato Frogs have this amazing ability to play dead when they sense any danger. They can also stretch and puff themselves with so much air that they look like a balloon to scare their predator. If nothing works, they have a glue-like white sputum which is spat out at the predator. Although that glue like substance is toxic for most organisms, it hardly does any harm to humans. Sadly, this beautiful frog is an endangered species in the wild. For this reason, they are now also bred in captivity and are available to be kept as domestic pets. 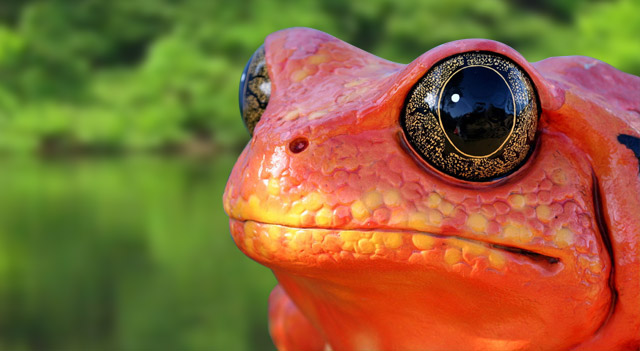 The Golden Tree Frog gets its name from the different hues it is found in. Mostly the color of these frogs is in the shades of brown and yellow. They also change color with respect to the weather conditions. As the name suggests, these frogs are arboreal (live in trees) and like humid places. They range from 1.5 to 4 inches in size while their life expectancy extends up to six years. Movement is essential for these frogs to search for food. Instead of eating dead insects, the golden tree frogs like to freshly hunt their own prey. 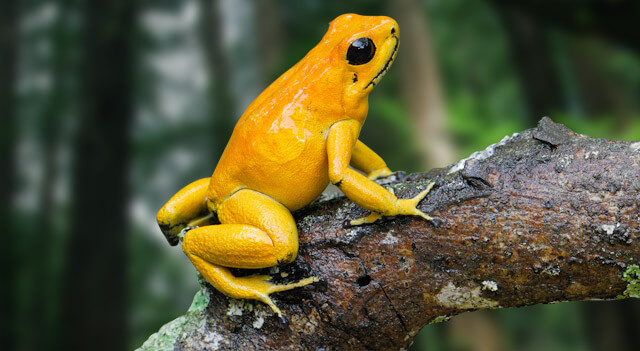 As aforementioned amphibian has a huge number of species, there are also many other sub categories. Each one of the types of frogs possesses interesting physical as well as behavioral characteristics. These organisms play their own part in maintaining the balance of the natural ecosystem and are also found in the human food chain in a few parts of the world.