Lionfish is a chordate which belongs to the family scorpaenidae and genus Pteroinae. Scientifically, it is known as Pterois while it is also known by several other common names including firefish, scorpionfish, dragonfish, tigerfish, butterfly cod, turkeyfish and zebrafish. The latter has been coined owing to the presence of alternating white, black or red bands on the organism’s body. The genus contains eleven different species which are found in rocky crevices, coral reefs and coastal waters of the Pacific Ocean. 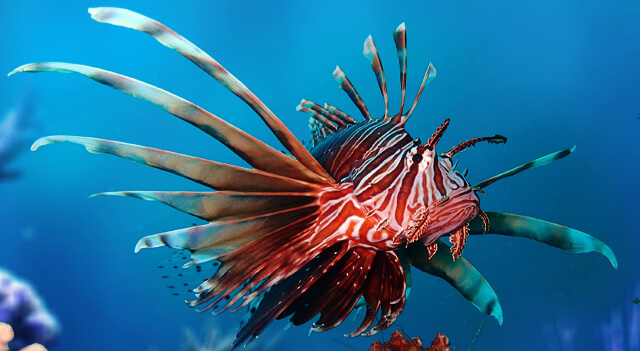 More lionfish facts are discussed below.

A fully grown up lionfish measures from 12 to 14 inches in size while juveniles may be as small as an inch. It is found in brown, black, white, orange and red colors with black, red and white stripes all over its body. The skin of the organism is covered with scales.

Here are the facts about its physical traits which help in identifying this marine animal.

The natural habitat of this animal consists of warm waters at the tropical region of the earth. The range of depth where lionfish species are found is from one to a thousand feet. Hard bottom of the ocean, coral reefs, artificial reefs and sea-grass are home to the animal. Different species of lionfish occupy the Indo-Pacific region which consists of the South Pacific Ocean and the Indian Ocean. The range of the organism includes quite an extensive area. To the east, this region extends from Australia and Malaysia and goes up to the French Polynesia as well as the Pitcairn Islands in the United Kingdom towards the west. This habitat range also extends from northern to southern Japan and includes southern Korea, the east coast of Australia where the Lord Howe Island is found, and New Zealand’s Kermadec Island. Lionfish species are also found all over Micronesia.

The presence of lionfish has also been reported in its non-native range. It was first observed to occupy the waters of South Florida in 1985. From then onwards, it has also been sighted along the southeastern coast of the United States of America, extending from Florida up to North Carolina. In addition, young lionfish has been found in waters around the Long Island, New York as well as Bermuda.

All species of lionfish are carnivores. Their most common prey includes small fish, small shrimp and crabs found around coral reefs. The organism feeds on a variety of species of invertebrates, mollusks and fish in order to fulfill its nutritional needs. Its hunting skills are excellent. As it approaches its prey, it blows jets of water in order to disorient the victim while maintaining its own balance and position owing to a well-developed bilateral swim bladder. Upon reaching the prey, it is corned as the lionfish spreads its pectoral fins. It is then swallowed in one quick motion without giving it any time to escape. The feeding time of the lionfish is usually during the early hours of the day when it is most active.

The female lionfish lays its eggs in water. A large number of eggs are laid at a time, ranging from 2,000 to a whooping 15,000. These eggs are then fertilized by the male who releases its sperm into the water. The fertilized eggs hatch within two days which contribute to the high growth rate of the lionfish population. In addition, the small hatching time also protects the eggs from being eaten or damaged by possible predators.

Baby lionfish remain near the water’s surface as they haven’t developed the ability to swim deep yet. As they grow bigger in size, their strength and swimming skills grow stronger. After reaching a size of one inch, they swim deeper into the water and become a part of their coral reef community.

The lionfish is significant to humans in the following ways. 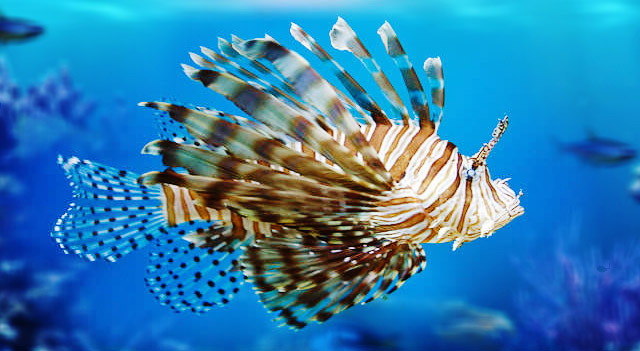 Here are some interesting lionfish facts.