With its name commemorating the British Monarch Queen Victoria, the Victoria Crowned Pigeon is a species of a genus of three unique and large ground dwelling pigeons. It is an elegant and a fairly large bird. The bird can be easily recognized by its beautiful crest which refers to the “crowned” in its name. It makes a whooping sound for calling and is native to the New Guinea region. The binomial name is Goura Victoria and the bird belongs to the family Columbidae. Let’s discover some more Victoria crowned pigeon facts as outlined below: 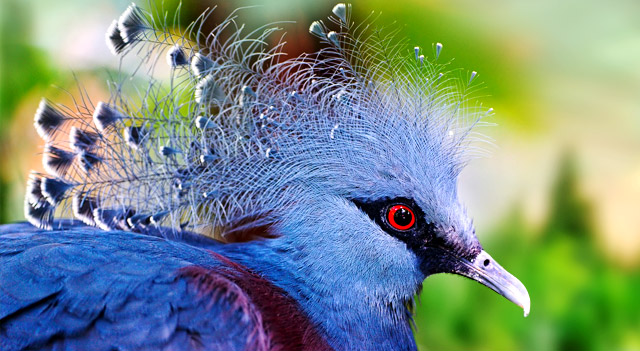 The Victoria Crowned Pigeon is a beautiful large bird with a bluish grey plumage, and elegant lace-like crest, maroon breasts and red iris. The crest has distinctive white tips. They are about 73-75 cm long and weigh around 3.5 kg. Some species are 80 cm long. The Victoria Crowned Pigeon is marginally larger than the other two species in its category. With a wide wing span, a loud clapping sound is made while the bird is in flight. Some other measurements are:

The bird is native to the region of New Guinea. It is majorly distributed in the low lands and swamps of the Northern New Guinea and its surrounding area. The areas which were previously alluvial plains including the sago farms are densely populated with this species of pigeon. They are mostly found in areas near sea level, and seldom fly towards highlands. They have been noted to be found at hills with 3000 ft. elevation. Their famous “sea to tree” movement is done on a daily basis.

Food and Diet of the Victoria Crowned Pigeon

This magnificent bird mostly feeds on fallen fruits like figs and berries. The pigeons that are in captivity like to feed on pines. The other supplements to their diet include seeds and invertebrates. Mostly they feed on fruits and plants only when they can’t find proper food for themselves. They have a composed walk along the forest floor to help themselves find food.

The mating activity is at its peak in the late wet season and also at the end of the dry season. To call for mating, the male lowers down its head, stretches forward with a rhythmic up and down movement of the head along with constant fanning or wagging of its tail. After this, the female lays a single white egg in a well-made and well-kempt nest. A week before the egg is laid, the male brings all the material to build a nest for the female partner and then she weaves her nest with sticks and palm leaves. The egg is incubated for a period of 30 days. The young ones are tended for a total of 13 weeks before they fly away. They leave the nest while they are still fairly smaller than their parents.

Some of the interesting Victoria crowned pigeon facts are listed below: 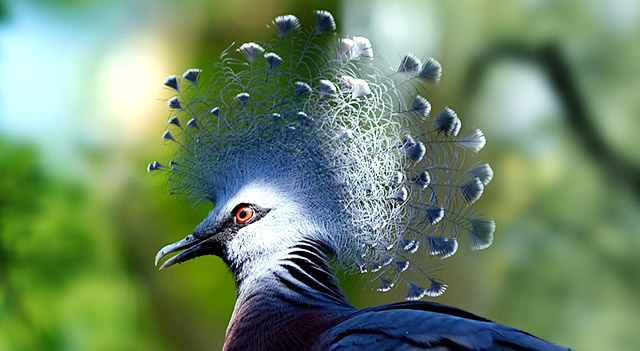 It is endangered as it has been actively hunted by humans for plumes, meat and other benefits. Hence it does not dwell near human population anymore. Another reason for its rarity is the loss of habitat due to logging. Although it is rare in the wild, the bird is still widely kept in captivity. A lot of zoos specifically in South East Asia have a significant population of these birds. Trapping pigeons or catching them for captivity is now illegal but it is still occurring. The Victoria Crowned Pigeon was listed as vulnerable on the ICUN Red List of the threatened/endangered species in the year 2004. It is also listed in the Appendix 2 of CITES. There are plans to launch public awareness campaigns for conserving and protecting this bird.