Hoopoe Bird Facts About Diet, Distribution and Habitat with Pictures

Famous for its distinctive crown of feathers, Hoopoe bird is found in Afro-Euro Asia. The Latin name for this colorful bird is Upupa while the English name is an onomatopoeic form, which basically imitates the cry or sound which the bird makes. In the family Upupidae, it is the only extant species. The Madagascar subspecies are sometimes referred to or considered as full species. Its subspecies Saint Helena Hoopoe is extinct.

There are nine known subspecies of the Hoopoe as recognized by Kirsten in The Handbook of the Birds of the Worldin the year 2001. These species differ in their size, colors, shades and the plumage. Meanwhile, two more species of Hoopoe have been proposed; one in South Africa and the other in India. 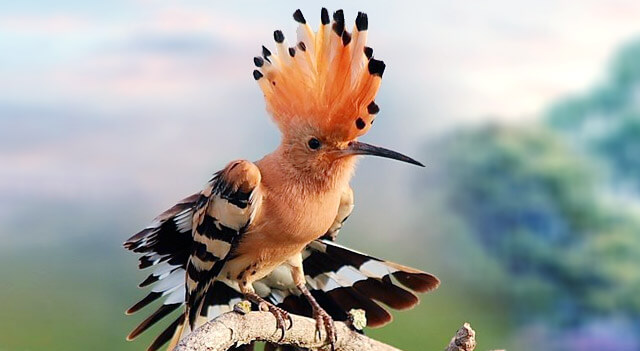 The hoopoe Bird is medium sized. It is 25-32 cm long with a wingspan of around 44-48 cm. The wings are round and broad which ensure a strong flight. In the Northern Migratory species, the wings are larger. The average weight of this bird is 46-89 g depending on the size, gender and the area where it dwells. The Hoopoe has an undulating flight, which appears similar to that of some gigantic butterflies. This is because the wings get half closed after every beat or short sequence of beats.

Their beak is long and strong. This beautiful bird also supports a distinctive bill which is generally black with a fawn base. The rounded muscular curvature of their head also supports the beak by opening up bill, while pecking or digging the soil. The plumage is generally in light shades. However, males have a slightly darker shade than the females. Their call is tri-syllabic oop-oop-oop, while two or four syllables are also common.

The Hoopoe is mostly spread across in Europe, Asia and North Africa. It is also widely found in Madagascar and the Sub-Saharan Africa. Most of the birds dwelling in Europe and North Asia migrate to the tropical zones during winters. On the other hand, the bird’s population in Africa is inactive (in terms of migration) all year round.

Their basic requirements for choosing a habitat are:

These requirements can be met easily by a wide range of ecosystem, hence the Hoopoes inhabits a wide variety of habitats like:

The changes and alterations made by humans in their natural habitat for the purpose of agriculture and farming has led these birds to also commonly dwell in:

The main component of Hoopoes diet is the insects. They mostly feed on insects but some tiny reptiles and frogs are also included in their food diet. They also like to forage on plant matter which includes seeds and berries.

On rare occasions, they will also feed in air during their flight, as their strong feathers allow them to maneuver around in the air to catch flying insects and moths etc. Their most common style of finding food for themselves is to stride over land and find insects, pupae, insect larvae and crickets, etc. They can probe the soil with their bill and also use their feet to grab insects. The most common prey for Hoopoes are:

Most of these are around 20-30mm long. For bigger preys that can range between 50-100 mm, Hoopoes prefer to kill them first by thrashing them on the ground or by using stones to beat them.

Hoopoes like to breed in warmer areas. They are monogamous, but the pair lasts just for one season. The female is responsible for incubating eggs and taking care of the nest while the male feeds her and the children during this time.

Some of the interesting facts about Hoopoe are enlisted below: 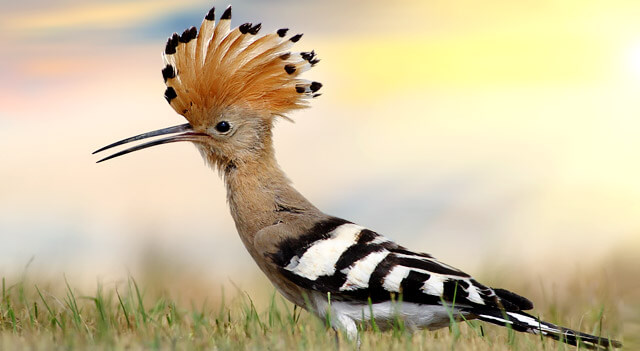 Hoopoe is protected by a lot of societies as it eats the pests and insects that cause damage to forests and the agricultural lands. This bird has a lot of significance apart from saving forests and plantations for humans. Some of the reasons are mentioned as follows:

In some countries and cultures Hoopoes are considered as thieves and a symbol of death and crime. They are also traded for their medicinal benefits. They have also been mentioned in a lot of poems, plays and stories in different times and eras.