What is Honking? Why Do Peacocks Honk?

One of the most fascinating gifts of nature, peacocks adorn the face of earth with the miraculous beauty of their body. They have been kept in captivity and admired for their matchless array of beautiful colours for thousands of years.

A peacock can be defined as a large colourful pheasant, typically coloured green or blue, that is known for its iridescent tails.

What is honking? Usually referred as the noise made by a car horn, a honk is also the name given to the sound produced by a goose or a peacock. But why do peacocks honk? Here you can clear up several of your confusions about these colourful birds while also learning some fascinating fun facts about them.

In some cultures, they are worshipped as divine while in others these lovely creatures are seen as something bad. There has been extensive scientific debate on the functions of the elaborate iridescent coloration and the large train of these birds.

Peacock is the male peafowl while peahen is the name given to its female counterpart. The widely known species include Indian or blue peafowl (of the Indian subcontinent), green peafowl (of the Southeast Asia), and the Congo peafowl (an African species).

Honking is a piercing, yet interesting call made by a peacock. Some people like this call while others say it is ugly. The reason has to do with the sound of their call or honk. It may also sound like someone crying for help.

However, one of the jobs served by the honking is to attract a female for copulation. Sounding like the noise of a clown’s horn, a honk is a loud noise that a male peafowl emits during the so-called “hoot-dash” display. Here the hood dash is a peculiar courtship move made by a peacock right before copulation.

So, when a peahen is already ready for mating, why does its male counterpart need to let out such a powerful squawk? Some researchers suggest that while honking, the male is actually attempting to lure other females by boasting of his ability to snag one female. 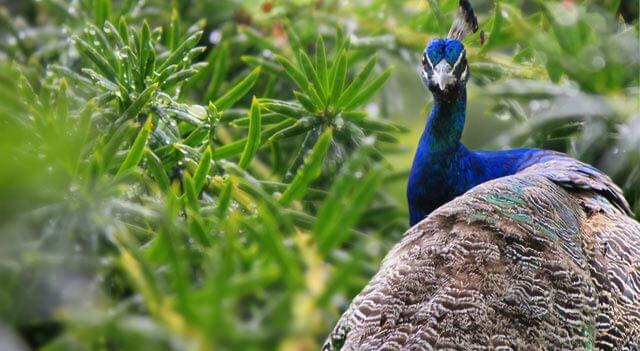