Flamingos are large birds classified into six different species. They belong to the family Phoenicopteridae. Their characteristic physical traits include long necks, pink feathers and stick like legs. In addition, flamingos are also seen standing on one leg – another one of their identifying marks. Many more such interesting facts are related to these fascinating birds. Read on to discover more information about flamingos. 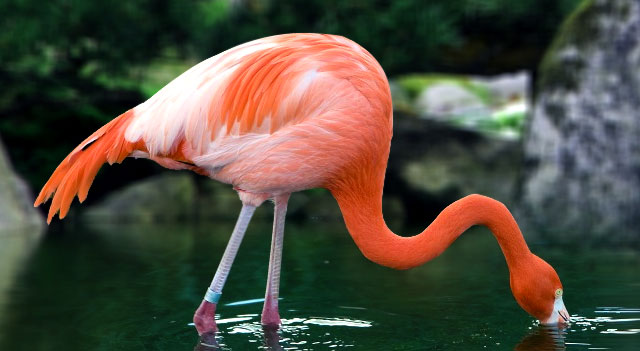 These fabulous birds prefer living around saline or alkaline water bodies. They are mostly found in or near shallow lakes and lagoons. They are also found in mangrove swamps, on sandy islands as well as around tidal flats. In case the level of water in these areas drops, flamingos may relocate towards other sources of water. All species of the birds are mostly found in tropical as well as subtropical regions.

These large birds consist of brightly colored feathers as their most conspicuous characteristic trait. The shade may range from bright pink to crimson. The bird’s size may vary from 47 to 59 inches in length. Their appendages can be as long as the entire body length of a grown up flamingo, measuring around 31.4 to 49 inches. Moreover, their long legs contain nineteen cervical vertebrae which contribute to smooth movement and lots of twisting.

Flamingos are omnivores. Therefore, they obtain nutrition from plant matter as well as meat. The preferred diet of these birds consists of small insects, mollusks, larvae, small fish, crustaceans as well as algae. The tongue of a flamingo contains small projections resembling bristles. These projections help in filtering the water as well as particles of food while ingesting them.

Flamingos love to live together in groups which are referred to as colonies. The purpose of these colonies is to provide protection to each other from potential predators. In addition, members of the colony also care for the young ones. On the other hand, as far as the mating is concerned, flamingos are monogamous. Once they choose a mate, they stay with the same individual.

Flamingos contain special traits which help them in adapting to their environment. These natural adaptations are explained below and provide fascinating information about flamingos.

Here is a list of some random and interesting facts and information about flamingos. 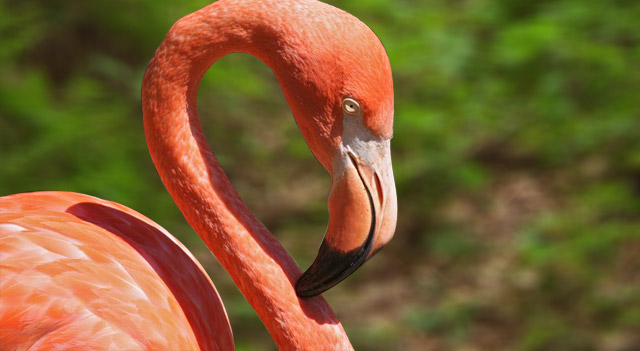 Since the number of flamingos existing around the world is quite stable, the bird is not grouped with endangered species. In fact, its conservation status is “least concern”. As long as there is a source of water and availability of food, flamingos can survive in temperate as well as cold environments. However, any damage to their natural habitat can cause a decline in their number, putting them at potential risk of endangerment.