Giraffes are creatures with extremely long necks and towering legs which make them the largest among all ruminants and the tallest of all land animals and mammals. They belong to Giraffidae family and further fall in the category of even-toed creatures. In the scientific world, they are known as Giraffa camelopardalis. Savannahs and open grasslands of the African continent are where they exist.

The tall animal measures from sixteen to twenty feet in height with its neck alone being around six feet tall. The males can be up to 3,500 pounds in weight while their female counterparts are approximately 1,830 pounds heavy on average. Their long necks are also quite heavy with an average weight of 600 pounds approximately.

Giraffa camelopardalis is a very interesting animal. Nine identified sub-species exist which differ on the basis of the pattern of brown spots on their skin. There are many intriguing giraffe facts. This amazing information is mentioned below: 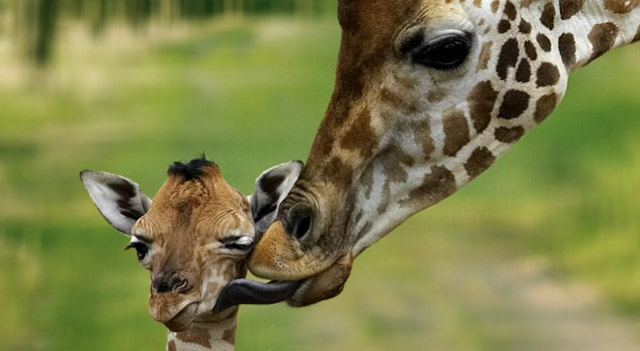 Among photos of other animals, the giraffe pictures are very amazing and arouse the fascination of kids as well as grown up animal lovers. The unique physical features of these tall mammals can be seen in their snaps. When you look at these photos, notice the following special traits:

These are the most interesting features to notice in the photos of Giraffa camelopardalis.

Giraffe habitat is determined by the presence of the mammal's food. It lives in areas with plenty of deciduous trees and evergreens. Its favorite food, the acacia trees, should also be in abundance. These exist in African open grasslands as well as wooden savannahs. Therefore, the animal can be found in eastern Africa in areas extending from southern Mali to Kenya as well as southern to northern South Africa. The animal is not found on other continents of the earth. However, they are often kept in captivity in zoos around the world.

They live peacefully, roaming around among the trees in the wild. They can live as long as twenty five years if not encountered by any predator. However, damage to their natural home by humans is causing the mammal to decrease in numbers. Sadly, the West African and Ugandan species are already endangered.