Centipedes and millipedes are both arthropods from the group myriapoda. This is the only similarity between them even though they are often mistaken to be similar. Centipedes – meaning a hundred legs – are members of the class chilopoda which originates from two Greek words meaning lips and foot. On the other hand, millipedes – meaning a thousand legs - belong to the diplopoda class. The Greek meaning of diplopoda is double foot. Since both the creatures have been put into different scientific classes, there are a number of variations between them including their physical traits, habitat preferences, diet and other factors. These differences are discussed below in detail.

Millipedes and centipedes differ from each other through the following physical traits. 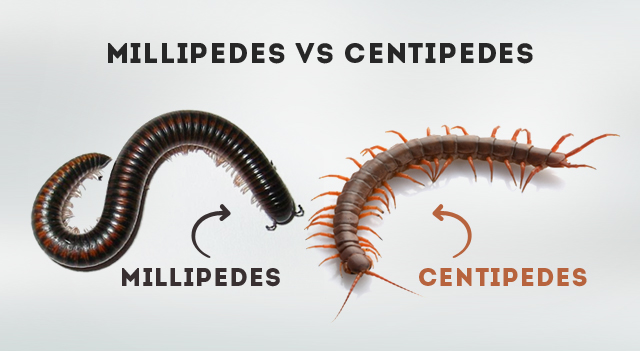 Millipedes and centipedes show different preferences with regard to their choice for habitat. Both the creatures are vulnerable to desiccation and, therefore, choose moist environments to live in. However, millipedes are mostly found around decaying vegetation while centipedes can be found in a variety of places including rotting logs, fallen leaves in a garden and damp places in a house.

Differences between the two arthropod classes with respect to their diet and feeding habits are discussed below.

Both the creatures also differ on the basis of their defense mechanisms. These mechanisms are discussed below.

Miscellaneous other differences between the two arthropods are mentioned below.

All of the above mentioned differences make millipedes and centipedes two distinguishable creatures despite being classified into the same scientific grouping of arthropods.