The beautiful Roseate Spoonbill is often put in its own genus Ajaja. The Roseate Spoonbill facts reveal that this wading bird is very social and belongs to the ibis and the spoonbill family, Threskiornithidae. Their phylum is Chordata and class is Aves. Roseate Spoonbill gets its name from its physical appearance. The pink color of its plumage attributes to the “rose” in its name while the spoon shaped bill attributes to the “spoonbill”. The Binomial name for this uniquely colored bird is Platalea Ajaja. The roseate are very interesting birds. Some more facts and details about them are entailed below. 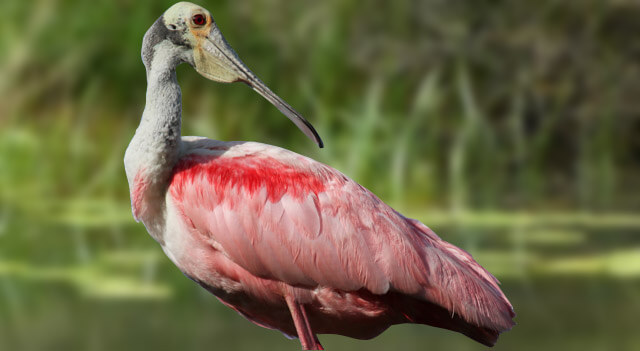 Usually Roseate is 28-34 inches long with a 47-52 inches wing span. It has a body mass of 1.2-1.8 Kg. The Tarsus and the Culmen measure up to 3.8-4.9 in and 5.7-7.1 inches, respectively. For this reason only the neck, legs, and spatulate bill appear elongated. They fly with their necks outstretched which also gives them the appearance of being long.

Appearance wise, they are gorgeous birds. The adults have a bare greenish head and a white neck. While the back and breast are deep pink and the bill is grey. Both the male and females have almost identical physical appearance with no sexual dimorphism. The only difference seen in the appearance of this bird is owing to the age and abode. The range of color variation is between pale pink to magenta. The pink color in their bodies is basically derived from their diet. Their diet consists of carotenoid pigment known as canthaxanthin which aids in giving the pinkish color to their plumage. Another carotenoid called Astaxanthin is also found deposited in its body feathers.

It is a resident breeder of South and North America and is usually found in the east of Andes and in the coastal areas of Caribbean, Central America, Mexico and the Gulf Coast of the United States. Mostly Roseate spoonbill is found in shallow fresh and coastal waters. A popular place in the United States to observe these birds is “Ding” Darling National Wildlife Refuge” in Florida. It is also extensively found in Texas.

The basic diet of Roseate includes crustaceans, aquatic insects, frogs, newts and the very small fishes overlooked by other large waders. Most of their food is found in shallow water, the reason why their habitat is near fresh water bodies. They wade through the water with their head bowed down and moving their bill side to side in water, searching for food. The spoon shaped bill helps it to easily sift the mud and find its prey. They often wade together in groups searching for their food. 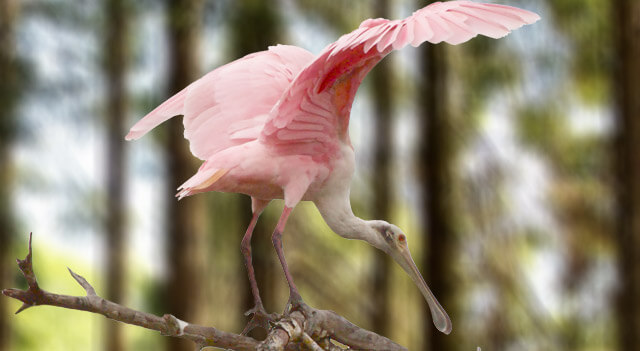 Some of the interesting Facts about the Roseate Spoonbill are enlisted below:

These birds nest in shrubs and small trees usually in mangroves. Roseate is ready to breed only after it enters the third year of its life. They lay three to five eggs at the same time. Their eggs are whitish with brown marks on them. The incubation takes 22-24 days. The young ones have white feathered hair with a pale pink plumage. The bill is also either yellowish or pinkish in the immature birds. For adults, when breeding, the “green buff” becomes visible on their heads. The deep pink tuft on the adult’s breast also shows that it is breeding or ready to breed.

Threats to the Roseate Spoonbill

There is currently no known threat to this bird and its species. Any sort of information on its adult predation is deficient. It secures the position of LC (Least Concern) on the conservation status. However the nestlings are many a times attacked and killed by turkeys, vultures, bald eagles, raccoons and fire ants but that does not pose any threat to the existence of the species. In the year 2006, a 16 years old banded Roseate Spoonbill was discovered, making it the oldest (of the category) wild individual. Before this the oldest Roseate was 7 years old.