Cuttlefish is a mollusk which belongs to the class Cephalopoda and order Sepiida. There are five different genera with 120 different identified species. It is a marine animal and can be found widely in most parts of the world oceans. The organism possesses several distinguishing traits which make it an intriguing creature. For instance, its ability to camouflage itself, flashing colors during mating, the ability to see backward and spurting ink to escape predators are characteristics which make cuttlefish one of the most interesting aquatic creatures. 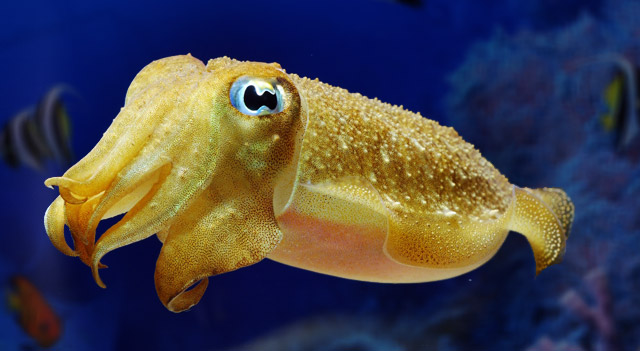 More cuttlefish facts are discussed below.

Cuttlefish are small sized organisms which range from 5.9 to 20 inches in size. Their weight varies from 6.6 to 23 pounds on average. They exist in a wide variety of colors including pink, green, red, brown, orange, white and yellow. The organism’s body is flat and broad with an oval cross-section. The cuttlefish possesses a fin which runs around the entire body.

Different distinguishing physical traits of the animal are described below.

One of the identifying traits of a cuttlefish is its cuttlebone. It is an internal structure which is hard and brittle. It is shaped like a shell and is porous. The shell is filled with gas. The purpose of the cuttlebone is to provide buoyancy to cuttlefish by altering the ratio between gas and liquid. The feature is unique to the cuttlefish and distinguishes it from its squid relatives.

Suckers, also referred to as tentacles, arms or legs are appendages found in Cephalopods. These limbs are flexible and extend from the head of the organism, encircling its mouth. There are 10 limbs in total – eight suckers surrounding the mouth and two tentacles can be elongated by the organism at will. The suckers and tentacles help the cuttlefish in locomotion as well as for catching and manipulating prey.

The head of the cuttlefish is well-developed and bears the animal’s mouth as well as its eyes. The eyes are large and sophisticated in structure and function. Their pupils are W-shaped. Fovea, which are sensor cells, are present on the retina at two different spots. The first spot enables the cuttlefish to look in the forward direction while the other one gives it the ability to see backwards. The organism can also sense the polarization of light which helps it determine contrast. However, cuttlefish are color blind organisms.

Cuttlefish is one of the organisms with exceptional camouflaging ability. Although it cannot see color, the organism can change the color of its body according to its surroundings. In fact, it is so good at doing so that it can even become invisible while lying at the bottom of the ocean floor. This ability helps the cuttlefish in hiding from predators as well as for catching its prey off-guard.

This ability of the organism is so well-developed that it can perform perfect camouflage even in darkness. It evaluates its surroundings and brings changes to its skin according to the color, contrast as well as the substrate texture. Other than color changes, chromatically complex patterns can be created by the organism in order to achieve flawless camouflage.

Cuttlefish belongs to a wide range of habitats. Various species thrive in warm, tropical waters as well as in cold parts of oceans. In addition, they are found in both shallow as well as deep waters. Although most species are found in shallow regions of oceans, some are also found at depths of 2,000 feet.

Cuttlefish are found in most parts of the world except the American continent as well as the extremely cold and deep waters of the Atlantic. On the other hand, eastern and southern coast of Asia abounds in cuttlefish and so does Western Europe, the Mediterranean and the coasts of Australia as well as Africa.

Cuttlefish are carnivores. They feed on small organisms found in the ocean. Baby cuttlefish mostly feed on small shrimp. On the other hand, the preferred diet of grown up cuttlefish generally consists of crabs and small fish. They use their ability to camouflage in order to catch prey. In addition, its set of two tentacles helps in grabbing the prey while the other six suckers help the organism in ingesting the food. The saliva of the organism contains neurotoxins which paralyze the prey before being eaten.

The male cuttlefish changes the color of its skin in order to attract its female counterparts for the purpose of mating. The female lays two hundred eggs at a time. The lifespan of the female comes to an end soon after it lays eggs.

Male dominance plays an important part in the organism’s mating behavior. Competition exists among the males and usually the larger rival wins as the smaller back away after being threatened. 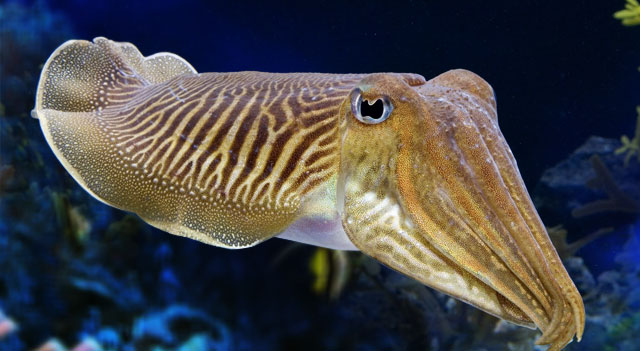 Here are some intriguing facts about cuttlefish.