Sea urchins are tiny water creatures found in oceans in different parts of the world. They belong to the phylum echinodermata which makes them closely related to sea stars, crinoids and other members of the phylum. Belonging to the sub-phylum echinozoa, sea urchins are further divided into several sub-classes. Furthermore, over seven hundred species of the animal are found. 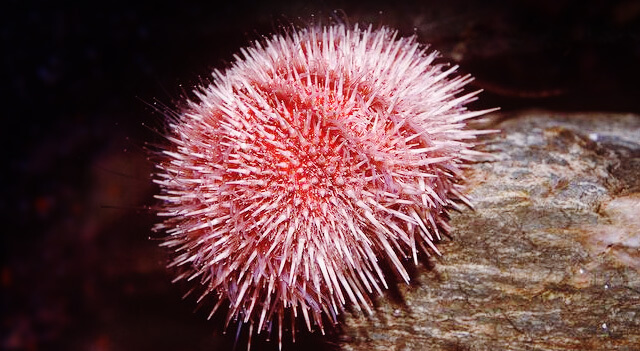 Sea urchins are referred to as hedgehogs of the sea owing to the presence of spines which cover their entire body. They are small creatures with a spherical body which varies from 3 to 10 centimeters in diameter. They may be black, brown, red, pink or purple in color. The distinguishing physical traits of sea urchins are discussed below.

The skeleton of a sea urchin is referred to as its test. It is composed of plates of calcium carbonate fused together to impart hardness to the skeleton. The test is covered by a thin layer of epidermis.

The shell of a sea urchin is found within the rigid test. The shells are also composed of plates fitted together tightly in order to provide protection to the organism from physical damage. Spines outline the shells and help the animal camouflage or fight predators. Each spine ranges from 1 to 3 centimeters in length with a width of 1 to 2 millimeters on average.

The tiny organism also possesses a set of five teeth which are found at the bottom of the body. As in the case of all other organisms, sea urchins use their teeth to ingest and breakdown food material. Interestingly, the teeth keep on growing throughout the lifespan of the animal. The arrangement of the teeth is in a circular form which is referred to as Aristotle’s lantern.

Hundreds of transparent tubes emerge from ambulacral grooves found on the sea urchin’s test. The length of these tubes is much longer than the animal’s spines and they serve various purposes. Since they help the organism move, they are referred to as “tube feet”. They serve the following several purposes.

Sea urchins possess a strong ability to adapt to different conditions. Due to this reason, they are found in oceans all over the world regardless of the type of environment and temperature of water. They are found on coral reefs, in rock pools, on rocks exposed by waves and in muddy areas. In addition, they are present in different depths of oceans.

Being omnivores, sea urchins feed on tiny plants and animals found in the sea. Mostly, their diet comprises of algae and sea weed which is found at the surface of oceans. During the unavailability of their favorite food, several species of sea urchins turn to new food varieties which may include remains of dead animals, sponges, mussels, sea cucumbers and other tiny ocean creatures.

The mode of reproduction for sea urchins is sexual and two different genders exist. The animal attains sexual maturity between the ages of two to five years. The females release their jelly-coated eggs in the water while the males release their sperms. Upon their successful union, the eggs are fertilized. A fertilized egg develops into a larva which is also referred to as pluteus. At the larval stage, individuals cannot be distinguished as males or females until they attain sexual maturity and release eggs or sperms. 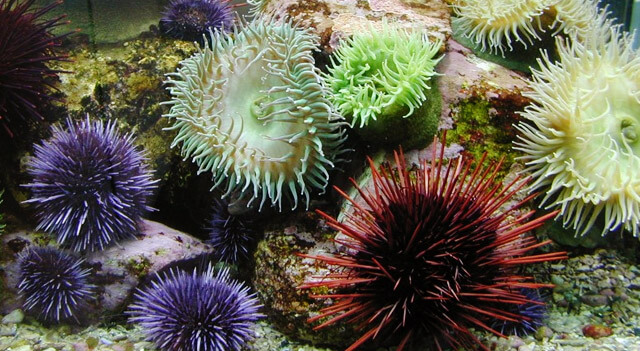 Their ability to adapt gives sea urchins survival during unfavorable conditions, such as shortage of food. Moreover, the animals also possesses features which help them protect themselves against their predators. These features are discussed below.