Manta Ray is among the largest creatures swimming in oceans, being next to sharks and whales in size. Also known as devil rays, these huge fish are biologically related to sharks but physically appear bat like as you can see in manta ray pictures. However, contrary to what they look like, they are not dangerous creatures. In fact, other animals of the ocean as well as humans are under no threat from these fascinating fish as they are not vicious carnivores. Moreover, unlike other rays, they do not have a poisonous spine. You can view their magnificent body, physical appearance and swimming & hunting modes just by watching manta ray video.

They have a flattened and wide body with two enlarged pectoral fins which look like the wings of a bat. These fins help them to swim in deep oceans. Extensions of these fins into front cephalic fins give them a devilish appearance, hence the name “devil”. There are openings called spiracles present on the upper part of their head through which water is taken in for respiration as the fish swim forward. They also have a short tail. 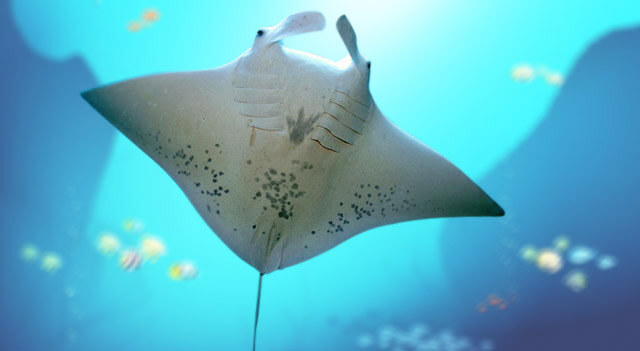 An important piece of Manta Ray information is that it is an animal of the oceans. Since it prefers warm waters, it is mostly found in the depths of the oceans where the temperature is pleasantly warm for it. However, it is also able to adopt quite easily. Due to this reason, this fish has also been found in other environments of the ocean, such as the coastal reefs.

These fish are migratory animals which swim to the shore looking for food and refuge from their predators. They are found in different regions including the Red Sea, the Atlantic Ocean, the Indo-Pacific Ocean, the Gulf of Aden, the Arabian Sea as well as the Bay of Bengal. Their largest population is found in Maldives where the waters are desirably warm with a huge supply of food for them. Around five thousand of these fish swim around in the waters of Maldives with some of them migrating back and forth.

Enjoy some informational as well as fascinating facts about these unique fish. 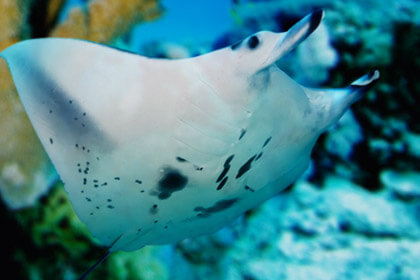 These harmless fish only seek plankton for nutrition. Their mode of feeding is filtration. This means that they take in large quantities of water which is then filtered for useful particles. They eat the plankton while the water is passed out through their gills. Plates found around the gills trap the food so that it does not pass out along with water. This food is then pushed into their stomach.

The plankton which they feed on consists of different types of organisms, such as small plants, algae, small animals and bacteria. They also feed on small crabs, shrimp and small fish if they find some. They swim forwards very slowly so that they can take in enough water for the feeding process. Their daily consumption is around sixty pounds of plankton. 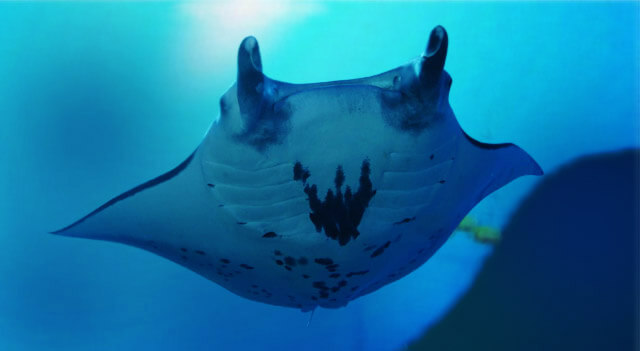 These creatures adapt their feeding habits according to the availability of their food. Most of them feed during the night while some of them have also been observed feeding during the day. Yet others have been seen hunting for food during both the times.

These beautiful and unique organisms should be protected through efforts aimed at preserving their natural habitat. Moreover, reducing the harmful effects of pollution and global warming are the other significant measures which can ensure a long life for these fascinating ocean creatures.