Here you will find very useful and interesting seahorses information. Close relatives of the leafy sea dragons, these animals are grouped among the weirdest creatures, inhabiting the marine environment on the planet earth. All of the extant 54 species of seahorses belong to the genus Hippocampus, where the name 'Hippocampus' has been derived from two Greek words, 'Hippos' and 'kampos', which mean 'horse' and 'sea monster', respectively. On this ground, you can claim that it is a horse-like sea monster.

Concerning where seahorses live, they are found throughout the world, particularly, in the shallow tropical and temperate waters. Named after their equine or horse-like physical appearance, they may grow as large as 14 inches or 35 1/2 in the body size. The fleshy appendages grown on their bodies are known as cirri which give them a weed-like appearance, thus assisting in camouflage.

Seahorses are usually poor swimmers and for moving through water, they use dorsal fins. The steering and stability are assisted through the activity of pectoral fins present on either side of the head.

If you want to know more about this wonderful water-dwelling creature, just read the following sections:

If you are unable to witness this beautiful animal in its proximity with the naked eye, you can still have the pleasure of viewing it in the vivid seahorse pictures. Viewing the photographs, you will see that in spite of being bony fish, they do not have scales, but rather their thin skin is stretched over a series of bony plates.

The bony plates, on the other hand, are arranged in the form of rings throughout the body, and each of the presently surviving species has a distinct number of rings. The characteristic feature of swimming in the upright mode in seahorses is not shared by their close relative pipefish that are adapted to the mode of swimming horizontally. However, it is to be realized that razor fish are the only other fish that can swim vertically like a seahorse. While viewing its pictures, you will also come across a unique characteristic of flexible and well-defined neck region, which is unusual among fish.

Besides adding to the existing pool of your knowledge about the animal kingdom, you can also entertain yourself by going through the following interesting seahorse facts and information:

Here follows a list of interesting seahorse facts for kids: 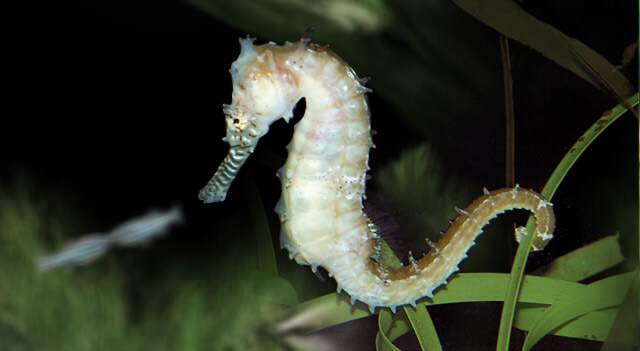