If you are the kind of person who finds little tiny birdies absolutely adorable then skylarks are definitely your type. Here you will be provided with important skylark information. This is a small bird that falls into the passerine bird category. These tiny English birds are unfortunately on the red list of endangered species today. 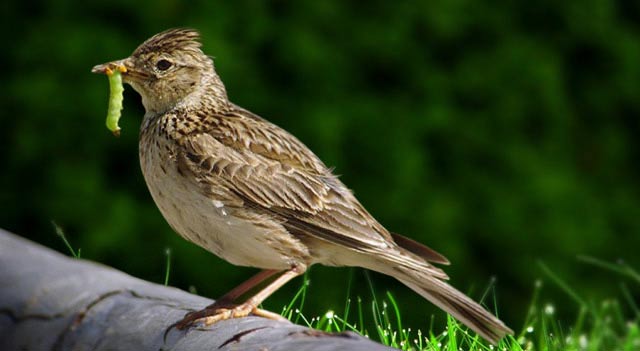 Their number has been falling very rapidly and it is said that soon we will be able to see them hovering in the skies no more. These are few of the birds that are falling in number so fast that it seems like there is practically no time to save them. It has been said that between 1972 and 1996, skylark population was reduced by 75%.

The main cause for their rapid loss has been recorded to be the new ways of farming. However, this implies that where there are not many farms present, we should be able to find these birds. This speculation is, actually, one of the skylark facts. If you look at the right places you should be able to find quite a few of these. Therefore, you just need to have the eye. And they are so small that you would only really just be able to hear them more than you actually get to see them.

Regarding skylark identification, its tiny size, 16 to 18 cm, makes it appears usually as a mere spot or dot in the sky. However, with a clearer vision you will be able to make out the brown streaks. It should not be confused with a finch, because it does not have that conical bill and it cannot possibly be a pipit, because, well it's too bulky. This contributes to its cuteness as it is small and fat. The white feather that appears at the edge of its tail is common to many birds, but the skylark has an additional white line that appears on the wings, especially apparent during flight, which would make it easier for an onlooker to identify it.

It is found on different kinds of land, such as moorland, dunes, farmland and grassland, so basically a lot of lands. 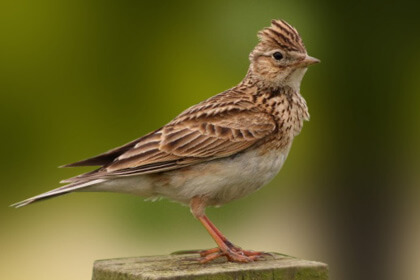 When it was said that the skylark bird lives on different kinds of land, it really meant, different kinds of LAND for these birds make nests on land, preferably somewhere in the middle of vegetation. This makes these nests really hard to find. Also, they lay 3 to 6 eggs in a special month, which is June. It also performs the most unusual flight. In this characteristic flight, the bird rises up, singing, and hovers at the same point for some time. Then it soars really high and stops singing and once that is done, when it wants to come down it just falls back to the ground. 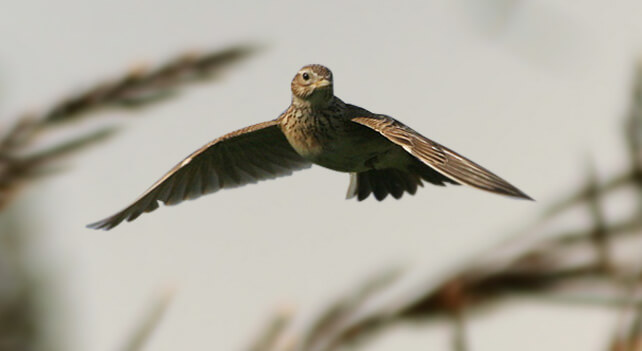 They eat a variety of things. Consumption of many invertebrates, leaves, and seeds. Nothing can be said very strictly about their diet because it keeps on changing according to the environment they live in and the season. They usually feed in flocks but at times in winter they also feed individually.