Spiders, like insects, have joined legs and bodies which are made in sections or segments. But, unlike an insect, a spiders body consists of two, not three parts, and it has eight, not six legs. Also spiders cannot fly, although baby spiders and small adult types may parachute on long silk threads. All spiders can make silk. It is pushed from special organs called spinnerets which are at the back of the body. Silk is formed as a liquid but hardens instantly on contact with air. Spiders use silk to protect their eggs and to wrap prey. Some use it to make traps called webs to catch their prey in. 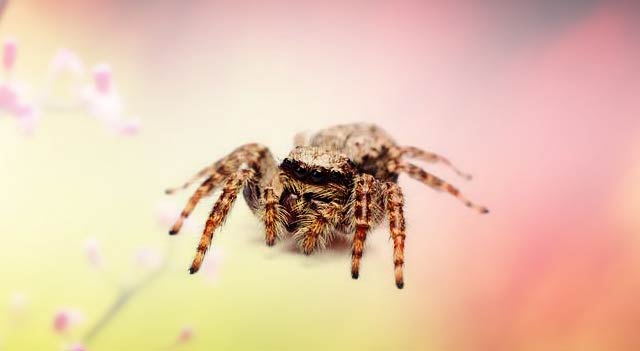 All spiders are carnivores. They feed mainly on the flesh of insects or other tiny creatures, although the largest species may catch animals as big as small birds and mice. When a spider has caught its prey it uses pointed fangs to inject venom (poison). This paralyses the prey and also contains and digestive juices which break down the preys flesh, making it liquid. The spider then feeds by sucking up this liquid meal. Some spiders make sticky, circular orb webs, but there are other sorts of trap, including hammock webs, funnel webs and trap-door traps. When an insect blunders into a web, the spider rushes out before it can escape, wraps its victim in silk and then injects it with venom. Not all spiders build webs. Wolf spiders have larger eyes than web-building types and rely entirely on speed and strength to outrun and overcome their prey.

Most spiders have very small eyes and are very short-sighted but jumping spiders have two huge eyes which look forwards and smaller ones looking sideways and backwards. They move like a cat stalking a bird until in jumping range of a fly. Then they leap onto the insects back and bite it with their fangs. Spitting spiders get their name from their method of catching insects. They spit a stream of poisonous glue at them. This spit a stream of poisonous glue at them. This sticks the insect firmly to the ground so that the spider can eat it at leisure. A few spiders live entirely under water and even build an underwater web. They swim to the surface regularly and lift themselves quickly out of the water and back again to trap a layer of air under their thick coat of hairs. A water spiders web is dome-shaped from its body. It lives here while waiting for tiny water creatures to swim by.