Fireflies Facts For Kids about Physique, Diet, Lifespan and Habitat

Fireflies can rightly be considered the "bulbs of nature", as they light the serene rustic environment in the pitch dark of the summer nights. Belonging to the insect family Lampyridae and grouped under the beetle order Cleoptera, they are commonly referred to as the "lightening bugs". Interestingly, they make use of the bioluminescence either to attract the opposite sex for mating or to prey. The luminescence produced by the fireflies is called 'cold light' and it does not contain ultraviolet or infrared frequencies. Concerning the color pattern of the chemically produced light from the lower abdomen of these winged beetles, it may be pale red, green or yellow, with the wavelength ranging from 510 to 670 nm. In the temperate and tropical environments, there exist as many as 2,000 species of the nature's lanterns. The presence of larvae, usually, depends on the abundant availability of the food in marshes or in wet, woody areas. Quite amazingly, these insects do produce light even in their larval stage, and are known as 'glowworms' especially in the European and Asian countries. However, in the Northern and Southern American continents, besides referring to the firefly larvae, the word "glowworm" also refers to the other related species of Phengodidae. 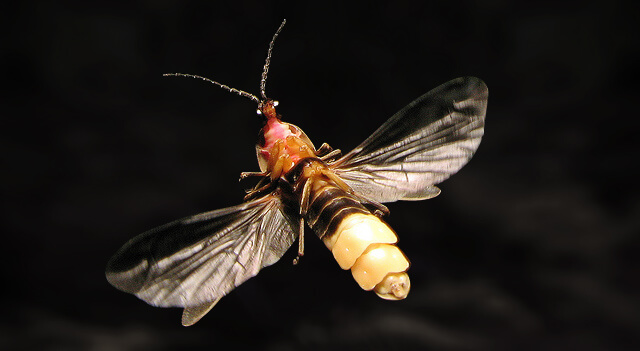 If you haven't still viewed the bioluminescence-producing winged beetles in the natural rustic environment in the night, just satisfy your curiosity by gazing at them in the firefly pictures, available in hundreds of thousands numbers over the vast universe of World Wide Web. Regarding their physical characteristics, they are soft bodied and tend to be brown in color, and in majority of the cases the front wings are larger than those found in other beetles. Usually, the females have the same appearance as that of their male counterparts. In certain cases, the females are not like the adult males, but show a greater degree of similarities with the larvae. Owing to this physical intimacy of the females with the larvae, they are termed as 'arviform females'. The only physical difference that distinguishes them from their larvae is that of the presence of compound eyes. While looking at the larviform females, you can also realize that they are wingless and are larger than the winged males of the same species.

Medical and Scientific Importance of Fireflies

Scientists have made a marvelous discovery that the fireflies have got great medical and scientific important as they can help detect diseases and abnormalities in the human body. Two important chemicals are found in the body of these lightening bugs, i.e. luciferin and luciferase, which produce bioluminescence in the presence of ATP. Adenosine Tri-Phosphate (ATP) is found in almost all the animals and serves as instant energy source. In the human body, all the cells contain sufficient supply of ATP, but in case of any abnormality, the affected cells have insufficient ATP. So, if these chemicals (luciferin & luciferase) are extracted from the fireflies and injected in the human body, the diseased or abnormal cells will easily be detected.