12+ Smart Facts about Wasps Diet, Habitat and Stings with Pictures

In This Article You Will Learn:

If you have been in villages climbing trees in the summer season, you would probably have witnessed the nest of small, bee-like animals with a usually yellow coloured body, called wasps. If so, you might also have been one of the unfortunate victims receiving their stings followed by immediate swelling of the affected body area. Regarding diversity, these organisms form a very diverse group of insects, whereas beetles show even greater diversity. 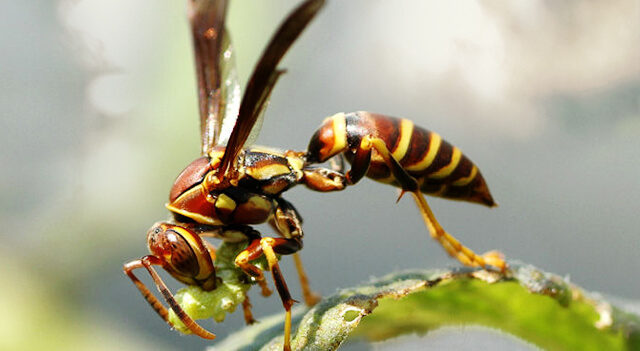 In terms of social behaviour, different species of wasps fall into either of the two major categories, namely, solitary wasps and social wasps. Talking of their physical features, they are ectothermic and show bilateral symmetry. Their development from an egg to a fully-grown adult involves complete metamorphosis. Sexual dimorphism is also obvious with sexes shaped differently and females larger in size.

Considering their lifespan, the majority of the wasps lives for less than a year and some die only after a few months.

Belonging to the phylum Arthropoda, class Insecta, order Hymenoptera and suborder Apocrita, a wasp is neither a bee nor an ant. As you look at the wasp pictures, you would see that each individual member has got one pair of wings and three pairs of legs. However, most of the members of this group have two pairs of wings.

They also have a venomous sting that is present only in females and is derived from the female sex organ. On their body, you can find either no or a few thickened hair. Looking at their habitat, nearly all the wasps are terrestrial and only a few specialized parasitic groups are aquatic.

Here follows a short list of the most startling facts about wasps, which besides adding to your knowledge will serve as an instant source of useful knowledge and literary entertainment.

What do Wasps Eat? Is It a Carnivore or a Herbivore?

In their mode of nutrition, the wasps depend ona varied diet during different developmental stages of their life. Owing to their dependence on both animal and plant species for diet, wasps are both herbivores and carnivores. Thusyou can more appropriately call them as omnivores.

In the larval form, they are parasites or parasitoids and become nectar feeders only as adults. The predator wasps use other paralyzed insects for their larvae while, in the parasitic forms, the first meals are derived almost always from the hosts in which the larvae grow.

On the other hand, the omnivorous species can be found feeding on a variety of food material, including fallen fruits, nectar and carrion.

How Long Do Wasps Live in Normal Atmosphere?

The lifespan of wasps usually depends on several different factors. Firstly, health plays a major role in letting them live longer. Temperature also affects their lifespan. At the beginning of winter, the entire wasp colony dies off, leaving only a few fertilized females behind.

On average, a wasp does not live for a year and some die even after a few months. However, queens may live for upto a year. It has been observed that at a certain point of the year, often around autumn, the bulk of the wasp colony dies away, and only the young mated queens are left alive. The young mated queens that have survived leave the nest and look for a suitable place to hibernate during the winter season.

What Do Wasps Do to Stay Alive During Winter?

Regarding the maintenance of body temperature, different animals fall into either of the two major categories, namely, homeotherms and poikilotherms. The former are the organisms that can maintain the constantor nearly constant body temperature against fluctuations in the external environment, while the latter are unable to do so.

Wasps are categorized as poikilotherms or ectotherms and do not have a well-developed mechanism to keep the body temperature at normal limits against the harsh conditions of the external environment. So, as is the case with other ectothermic animals, when winter season sets in, they have to go for hibernation in a suitably warm place. As before the start of winter, the entire wasp colony dies, leaving only a few fertilized queens behind, the survivors go for a long sleep.