Grasshoppers are insects which belong to the phylum arthropoda and order orthoptera. They are members of the suborder caelifera with eight superfamilies and over eleven thousand different species. They are found in different sizes with an average body length ranging between 3 and 5 inches. As the name implies, grasshoppers are creatures found mostly around grassy fields and gardens with a unique ability to jump up to unbelievable heights crossing huge distances in comparison with its size. The insect has many more interesting facts related to it. Go through the following grasshopper facts and discover more intriguing information that you wouldn’t have gone through ever. 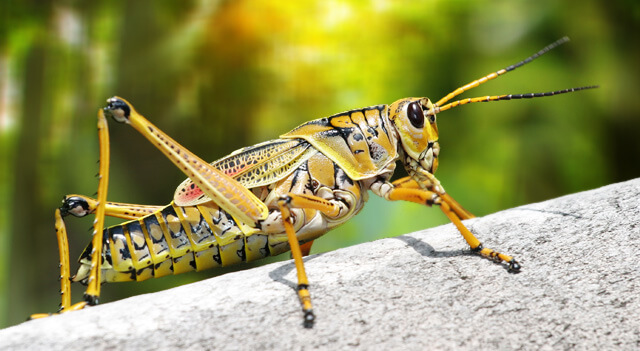 Grasshoppers can be identified through the following distinguishing traits.

They may exist in any of these three colors: green, brown or yellow. This color helps the insect camouflage, hiding among fresh green or dry brown grasses.

Grasshoppers possess a set of six jointed legs which are powerful and give strength to the insect. The hind legs are longer and are used primarily for the purpose of jumping. On the other hand, the purpose of the four legs at the front of the body is to walk or to hold on to food.

Grasshoppers also possess the ability to fly due to the presence of wings. There is a set of four wings – one pair at the front and one at the back. The front pair is termed as tegmina and consists of wings which are comparatively narrower and harder than the hind wings. The latter are larger as well as membranous.

The antennae of a grasshopper are an extremely important part of its body since they impart the insect the ability to detect smell and sense touch. They are remarkably long with around twenty to twenty-four segments. These antennae can be as long as the body of the insect.

There are two conspicuous compound eyes, each one being at either side of the insect’s head. These eyes enable grasshoppers to enjoy a broad field of vision. The insect can detect the shape and color of objects as well as their distance and movement. In addition, there are three more eyes – termed as ocelli – at the forehead of the insect. These eyes are used to detect the intensity of light.

The abdomen of a grasshopper consists of eleven segments. The first segment contains an organ called tympanum which enables the insect to hear. The ninth segment of the abdomen contains a pair of appendages known as cerci while the last two segments contain the insect’s reproductive organs.

The thorax consists of three segments which are fused together. This region bears the six legs of the insect as well as its two pairs of wings.

With more than 2,000 classified genera and 11,000 species, grasshoppers are distributed widely all over the globe. Their habitat consists of regions with a plentiful supply of grass or other types of plants – the main food source for grasshoppers. Populations of the insect may be found in open lands or deep forests. They may also be found in fields of crops where they are considered a pest since they can turn out to be extremely destructive for agricultural produce.

Mostly, a large variety of grasshopper species is found in tropical wetlands. In comparison, a fewer species exist in regions of the temperate zone. Overall, grasshoppers are found on all continents of the earth except Antarctica where they cannot survive the freezing temperature.

A grasshopper’s lifecycle consists of three stages: the egg, nymph and adult. It is termed as incomplete metamorphosis or hemimetabolism. More information about this lifecycle is discussed below.

Egg pods are laid by female grasshoppers during summers or late autumn. Each pod contains around two dozen eggs. After laying the pod, the female inserts it into the ground near food plants for protection. When the winters approach, the pods go in a state of diapause – a condition in which the eggs assume dormancy till unfavorable environmental conditions subside. When the winters are over, the eggs resume their development process and hatch after a period of around nine months after being laid.

Baby grasshoppers which come out of hatched eggs are termed as nymphs. The first baby forms a tunnel in the soil to come out at the surface of the ground. The nymphs which hatch out of the remaining eggs follow the sibling. These nymphs possess the ability to jump in order to escape their predators.

The adult stage of the insect is also referred to as imago. An adult grasshopper is larger in size than the nymph and possesses fully functional wings. Adults can undergo further physical changes in order to survive certain environmental pressures, such as overpopulation. In such a scenario, the production of a certain chemical is stimulated in grasshoppers which brings about several changes. It grows larger in size, starting eating more and flies around in groups. This form of grasshoppers is known as locusts which can be extremely destructive for vegetation including agricultural crops.

Grasshoppers are omnivores. However, they prefer to spend their life as herbivores and feed mostly on grass and other types of plants. They may also eat smaller insects or dead remains of animals in case they face shortage of their favorite food. Although they can feed on any type of plant matter, grasshoppers mostly choose grasses and low lying plants. Other sources of food for the insect include grains such as wheat, oats and barley. On the other hand, their most preferred vegetables are lettuce and broccoli. Moreover, since they can chew on anything – be it tender or tough – they may also feed on carrots, beans and onions.

Discussed below are some grasshopper fun facts.

Grasshoppers – one of the oldest organisms on earth – have always been an important part of the food chain and, therefore, contribute greatly to the ecosystem. They are both useful as well as destructive. There are many interesting grasshopper facts as they create music and amuse onlookers with high leaps. Indeed, these are very fascinating insects.