Why Are Pandas Endangered - Threats to Panda's Existence

Pandas are among the most loved animals on the planet owing to their cuddly and adorable appearance. They reside in regions of Southwestern China. This area runs along the eastern part of the Tibetan Plateau where mountains ranging from four thousand to twelve thousand feet in height are found. This is where plentiful bamboos grow giving rise to dense stands. Unfortunately, the number of pandas has been on the decline since a long time. These harmless, cuddly creatures were put on the list of endangered species in 1984. Despite efforts to protect the panda species, the number of this animal has been dwindling quite rapidly over the years. Today, only around seven hundred to a thousand pandas live in their natural habitat while some are on display in zoos around different parts of the world.

An endangered species is one which is in immediate danger of becoming extinct. Species of plants as well as animals are declared to be endangered by IUCN—International Union for Conservation of Nature. Different organisms have various reasons for making it to this list. The following discussion explains the main reasons which answer the question: why are pandas endangered? 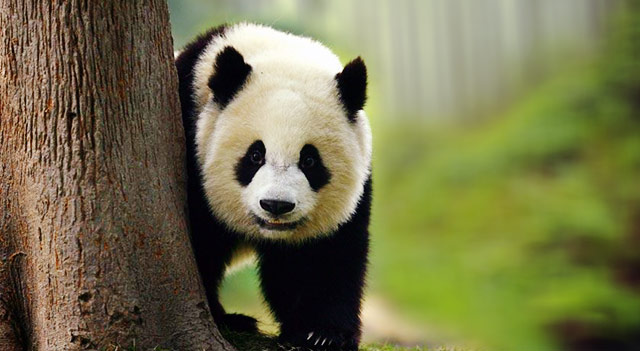 The habitat or natural home of pandas is Southwestern region of China where mountains exist and plenty of bamboo is found. However, industrialization, urbanization and other similar human activities have caused this natural habitat to be destroyed to a large extinct. This has been exposing pandas to predators—mostly human beings. In addition, a loss of habitat also makes it difficult for animals to find sources of food. As a consequence, only a few of the panda species have been able to survive in the limited area of natural habitat left intact.

The only source of food for pandas is bamboos. These animals do not feed on any other type of plant. Since bamboos contain a limited portion of nutrients, each panda has to feed on multiple bamboo sticks throughout the day. Interestingly, one panda feeds on around thirty to eighty pounds of bamboo in one day. This takes up as much as fourteen hours of its entire day. Therefore, a large amount of bamboos are required in order to provide food for pandas. However, with the loss of natural habitat, this sole source of food has also been dwindling. Without proper nutrition, pandas fail to survive and expire before reaching their natural life expectancy.

Another reason of panda extinction is the reproductive cycle and mating behavior of this animal. Pandas do not reach the age of maturity before five or seven years of age. Therefore, reproduction can only occur after this age. Once a female panda becomes mature, its fertility period lasts for only a few days in a month. In addition, during this period, it is very choosy about selecting a mate. In case it doesn’t find a suitable male mate during the fertility period, reproduction fails to occur.

Moreover, only one or two cubs are born at a time. These cubs are very small and weak since they weigh only four to eight ounces. Often, these cubs fail to survive owing to unfavorable conditions or predators.

All of these reasons have been discouraging the growth in the number of pandas in the world. It is no doubt, therefore, that these animals are endangered today.

PPoaching has been the reason behind the endangerment of a number of animal species. Unfortunately, pandas have also been the victim of human hunting activities. These creatures have been hunted since the primitive times for their beautiful and silky fur. Foreigners have been tempted by this high quality fur even during the recent times. A prohibition on poaching was then imposed in 1930 when the second Sino-Japanese war was going on. However, in 1949, illegal hunting was continued by the natives for the meat of pandas. The rising population and feminine had forced people to resort to this poaching activity.

Today, there are strict laws in China which prohibit the hunting of this endangered organism. In addition, today there are organizations, such as IUCN and the United Nation’s World Wide Fund for Nature which work for the protection of such species. Although it is difficult to remove pandas from the list of endangered species, such organizations can help prevent further damage.