Bongo Animal Facts about Diet, Habitat and Others

Bongo animal is one of the most interesting creatures found on the African continent. It is the largest type of forest antelope possessing a striking appearance. The animal is covered with a chestnut colored coat. What makes it stand out is the pattern of white stripes on the coat. In addition, both the genders possess spiraled horns.

Read on to discover more fascinating information and facts about the bongo animal.

Bongo antelope is a mammal. On average, the body length of a fully grown bongo varies between 5.5 and 8.25 feet. The animal also possesses a tail which could be as long as 18 to 26 inches. Their long horns can grow up to 37 inches. Running around the reddish-brown coat are vertical stripes which are ten to fifteen in number. White bands, which are broader than the body stripes, appear on the legs. On the other hand, small spots can be found on the cheeks of the animal. 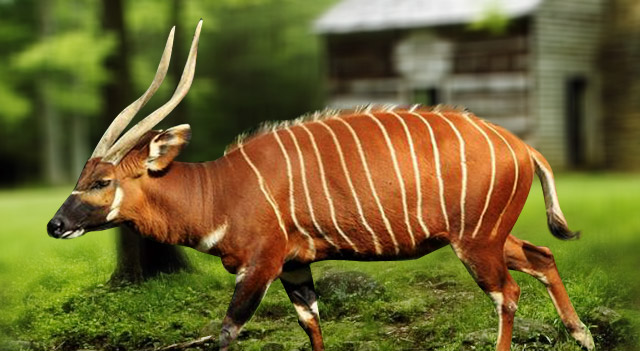 The Bongo animal occupies parts of the eastern, western as well as central Africa. However, its population has been dwindling leading to the animal becoming rare today. It has become completely extinct from some countries of the continent. Some populations are still found in dense lowland forests as well as among bamboo plantations in western Africa. The populations found in this region are referred to as Lowland Bongo. On the other hand, the animal’s historical habitat also comprised of regions of Kenya and Uganda. Here, the antelope – found in highland forests – is known as Mountain Bongo. However, it has almost completely disappeared from Uganda and is now found only in a few regions of Kenya.

The Bongo antelope is a herbivore. Therefore, it feeds solely on plant matter. It is referred to as a grazer as well as browser. As a grazer, the animal devours various types of grasses as well as other types of vegetation growing at the ground level. On the other hand, as a browser, the antelope feeds on plant matter growing at a higher level. These include leaves, shoots and fruits. Usually, herbivores exhibit only one of the two behaviors. However, in the case of bongos, they adopt either of the two manners depending on the availability of food.

Although the bongo itself is a herbivorous organism, it attracts fierce carnivores which are its natural predators. These include lions, leopards and hyena. Even large pythons engulf and feed on the antelope.

Other than these natural predators, the animal has another significant enemy – human beings. They are hunted for their valuable horns, coats as well as meat. Communities living near their natural habitat pose the biggest challenge to them. Dogs are used to hunt the animal down. Despite its natural camouflage, the animal is caught and killed. Owing to this reason, populations of this fascinating antelope have dwindled very fastly.

Sadly, the populations of this interesting creature have dwindled rapidly over the past few decades. Therefore, steps are being taken for the conservation of the remaining members of its clan. Different organizations have undertaken projects for this purpose. These include the African Wildlife Foundation and the Zoo Atlanta.