Kangaroo, the largest living marsupial is a native of Australia. The term marsupial usually denotes a pouch in the mammal's belly in which it rears its young. There are over 60 species of kangaroos, known to mankind. As you can see in the kangaroo pictures, the red species is the largest of all the kangaroos while rat kangaroo, resembling a rat as the name suggests, is the smallest. These mammals sleep during the day in the tress, and come down to land to graze at night. We will be surprised to know that kangaroos are unable to move backwards because of their fleshy tail. While fighting, the kangaroos use their forelimbs to fight their predators while their strong tail assists them in maintaining balance. Their life span lies between 12-18 years. 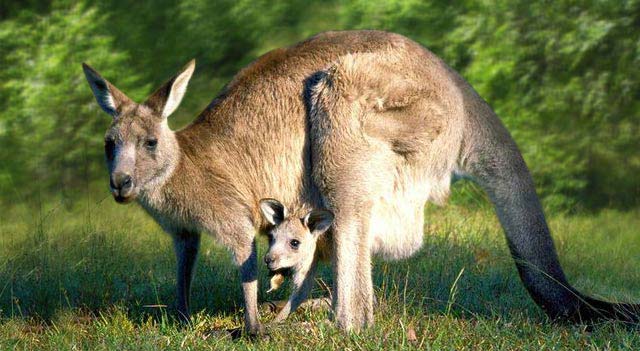 Over 50 million kangaroos are found in Australia. Kangaroos easy go nature enables them to inhabit a variety of habitats. In fact, they are often found in garden, parks and golf courses. Kangaroos are herbivores and prefer arid or semi-arid regions where plentiful grass is available to them. Furthermore, a vast majority of kangaroos also inhabits woodlands, scrublands and pasturelands.

Being herbivores in nature, kangaroo diet consists of a wide variety of plants, including grasses, shrubs, leaves and shoots. These mammals get sufficient moisture from their diet, which means they can survive for longer periods without drinking water. Kangaroos possess chambered stomach that assists in proper digestion. Kangaroos are ruminants. They do not chew food but swallow it instead. When the food is scarce, they make the use of already existing food by regurgitating it. Not all the kangaroos are herbivores. Some are omnivores and they feed on plants, insects and small animals.

It is one of the most interesting kangaroo facts that they are the only mammals capable of hopping. They have very strong hind legs and large feet. Their long, fleshy tail enables them to maintain balance while they move. It further serves as a fifth limb when all the four limbs are in use. Hopping facilitates the kangaroos in making a huge stride, as long as 3 meters. That is pretty amazing!

Kangaroos are the only mammals with pouch on their bellies. The young ones live, drink milk and nourish in these pouches, until they are strong enough to face the adversities. Kangaroos are born after seven weeks of pregnancy. A female kangaroo can have three babies at a time; a young Joey still residing and nurturing in the mothers pouch, a developing one attached to the teat and a developing embryo, residing in the womb of mother, awaiting birth. 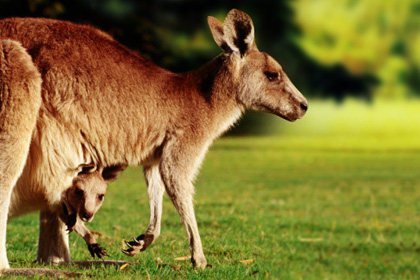 These marsupial mammals have no major threats. Land development, habitat loss, wild fires and hunting can be accorded as some of the major factors for their declining number. Some species can be deliberately hunted with a permit to control their population. 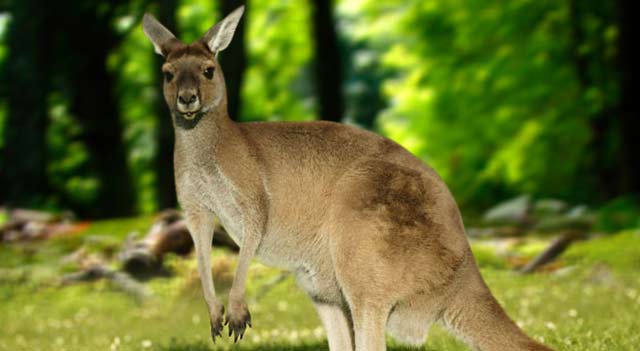