Lions are now found only in grasslands, dense bushes and savannahs of Africa and Asia. In historic times, they started disappearing from few parts of Africa and Asia because of their clashes with humans while trying to get the perfect habitat for themselves. Now their population in forests is very small and they are being kept in reserves and national parks. They live up to 30 years in captivity, while 13 , 15 years in wild. An adult lion may weight up to 250 kilograms; hence, after Tigers they are the second largest living cats.

Lions are like pet cats, but much bigger, taller and stronger. They can run at 60 kilometers an hour but not faster than Cheetahs. They have good eyesight and can even see well in the dark, about six times better than a human. They have good sense of smell and keen hearing too, which help them to track down their prey. They hunt in the form of groups, so that they can kill their prey easily. With the help of their powerful jaws and strong teeth, they can break a bone with one bite. 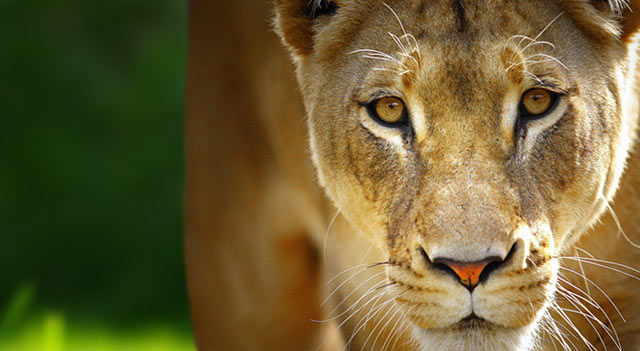 Lions are family animals; they live in the form of groups that are known as Prides. A pride usually consists of about a dozen animals. At least two of them are adult males, the rest females and their cubs. Female lions usually stay with the pride forever because mostly they are sisters who want to live with each other. Male lions leave when they are about three years old and roam around looking for a new pride to join. New lions in the pride try to kill the cubs, because they want to have future cubs from their genes, and it does not seems strange to them.

The responsibility of a male lion is to protect their pride and territory. Mane has a great importance in lions life. The darker and denser mane of a lion makes him stronger. Those lions have longer reproductive life than others and they can survive in difficult conditions. Female lions are the main hunters but when the hunt is over; males eat first, and then females and cubs get the leftover. A big prey, such as a rhino, baby elephants, giraffes, wildebeest or a large zebra, can feed the whole pride, and there usually is no need to hunt for a few days.

Most of the Lions are found in African countries while a few are found in India. In Africa, lions can be found in savanna grasslands with scattered Acacia trees which serve as shade, their habitat in India is a mixture of dry savanna forest and very dry... Read More ->

Average Size Of A Lion

Average size of a lion can be different in different cases. An adult male head and body length vary between 2.6 to 3.3 meter while its tail length vary from 0.6 to 1.0 meters. The height of a lion at shoulders is about 1.2 meters. With this... Read More ->

Average Weight Of A Lion

Average Life Span Of A Lion

Average life span of a lion is not very long but it depends on its habitat. On the average, the life span of a lion ranges about 14 to 15 years. A lion can live for more than 15 to 20 years in captivity while in wild; it lives for 10 to 14 years. It also noted that male lions live for... Read More ->

How Much A Lion Can Eat In One Meal

How much a lion eat? An adult male may eat 40 kg (90 lb) of meat in a single meal but this much food is sufficient for about 4 hours. Lions are furious hunters and they eat the food of their own choice. It is also an interesting fact that a lioness do... Read More ->