Mole animal is a small, insectivorous mammal that is often mistaken for rats, shrews and hedgehogs for bearing close resemblance with them. These cunning creatures usually reside underground in burrows, pastures, tunnels and gardens and are rarely seen above the ground. Hill Mole, a unique species of Moles, loves digging tunnels and making molehills. The soil that these animals dig is wiped out of the way that accumulates vertically, forming a mound like structure. These mounds are called mole hills. These animals prefer to reside near water sources like streams, lakes and rivers, where the food is abundant. These active mammals can starve to death if they don't eat after every few hours. 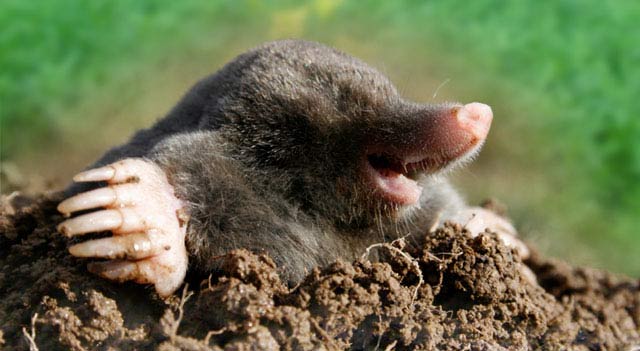 As obvious in mole animal pictures, these mammals bear close resemblance with shrews and hedgehogs. The most distinctive physical feature of these mammals is their sharp, elongated nose, bulging right in front of their faces. The nose is covered with around 22 sensitive and touch receptor tentacles that prevent the dust from entering into the nostrils. These tentacles are, however safe, and cause no serious threat to their predators. They carry long, cylindrical bodies that are covered with black fur with velvety texture. These mammals possess cunning claws that are well adapted for digging purposes. Their tiny, yet complete eyes are covered in fur, making them barely visible. Apparently, both sexes are pretty identical, but males outdo females in size.

Where Do They Reside?

This fastest eating mammal finds wide distribution in Canada, Europe, North America and Britain (with the exception of Ireland). These creatures are predominantly found living in tunnels and burrows, foraging for various invertebrates like worms, grubs and mollusks. These mammals dig tunnels with varying lengths including shallow tunnels (2-3 meters deep) and much deeper tunnels to minimize any external threat. Usually these tunnels enable them to adapt an underwater route, serving as an easy escape in times of danger.

What Do The Feed On?

These agile mammals are omnivores and largely hunt tiny insectivores as their prey. They saliva in their mouth contains specific enzymes that enable them to paralyze earthworms, leeches, mollusks and small fish. It is one of the important mole animal facts that they are even capable of storing food for later usage. To our surprise, the star-nosed mammal is known to be the fastest eating mammal for its astonishing ability to locate and consume its prey in less than 120 milliseconds. They have 44 cunning teeth, which ensure a strong grasp on the prey.

Unfortunately, very little is known about the social lives of these stunning mammals. They are found to be active during day and night round the year. These mammals are colonial and are known to share their tunnels with other members in the group. For their need to eat after every few hours, they sleep for just four hours and remain busy in digging holes for the rest of the time.