Where Do Squirrels Live

Squirrel is the common name for over 250 species of rodents in the family Sciuridae. Their sizes and physical traits vary widely and so does their habitat. If you are wondering about where squirrels live, you should know that they exist on all continents of the planet except Antarctica and Australia. However, some species have now been introduced in Australia as well.

Their habitat is divided in two major categories: trees and ground. The ones with the ability to climb up and jump from one tree to another live on tree tops. On the other hand, others prefer to build their nests in bushes and shrubs on the ground level. 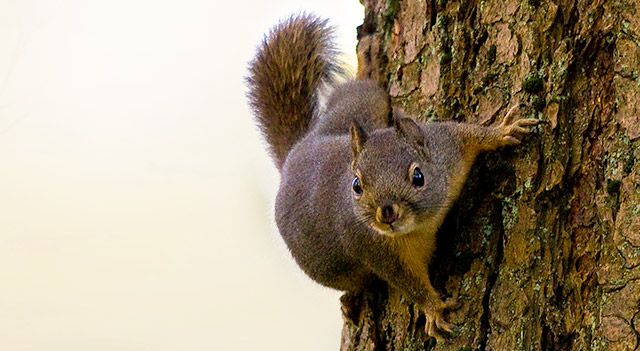 The first factor which determines their choice for habitat is the availability of food. Mostly, these rodents live in areas where there are plenty of plants producing nuts and seeds. Abundance of fruits and vegetables is also a perk. Usually, they would feed on any part of plants, such as, leaves, roots, stems and even tree bark. Some non-vegetarian species also consume insects, mice and snakes. Therefore, their residing places are mostly forests, woodlands and grasslands. They are also attracted to parks in cities where plenty of trees are found. Similarly, if you have planted lots of flowers in your home garden, you might end up attracting a group of these small, furry mammals as they love to eat flower bulbs.

The wild species mostly live in deep forests with lots of plantation providing them hiding places. In this way, they can remain hidden from ferocious predators. Those living out in the open are not very safe. Specially, the species found in cities often meet their fate when they are accidentally hit by cars.

Where to Find Different Types

This huge group of rodents is found everywhere, be it dry desert areas or prairies, city parks or wild forests. In case you want information about the habitat of some specific specie, take a look at the following list.

Other than these popular species, a wide variety of other types span the entire planet earth.

Regardless of their size, physical traits and behavioral differences, all squirrel species living up on trees are grouped as tree rodents. They use twigs, grass and plant leaves for building nests which are lined with bird feathers or fur in order to provide a soft, comfortable, cozy and rather luxurious interior. These amazing nests are known as dreys.

Tree species may either live high up on tree tops or inside the holes found in tree barks. They may also store nuts, acorns and other types of food there.

Among the most popular tree species are the grey squirrel, red squirrel and flying squirrel. The smallest member of the Sciuridae family African Pygmy Squirrel also lives on trees. Overall, this is the most diverse group including majority of the two-hundred plus squirrel species.

The choice of this habitat is favored by their impressive climbing ability and agility. Special double joints found in the legs help them move up a tree bark quickly. Flying squirrels have been bestowed with even more adaptations which allow them to jump over impressively long distances between trees.

A large variety of these mammals also resides at the ground level. They may build a nest in bushes or dig a burrow in the ground to hide from potential predators. These ground species have also been known to build a nest in attics of homes if they find a passage inside.

These rodents move around on the ground to find food. Their food storage places are also found on ground level as they dig burrows to hide food stuff.

Among the most popular of these rodents found on ground are chipmunks, prairie dogs, rock squirrels, and other members of the Marmot tribe. The Alpine Marmot is also categorized as a ground squirrel although it lives on high altitudes up on mountains.

The ground species are not as safe from predators as the tree species. Their most dangerous predator in cities is human beings.