What Do Grasshoppers Eat?

Grasshopper is a fascinating insect from the order orthoptera. Over eleven thousand grasshopper species are distributed all over the world, living in grasslands, prairies and forests. Their habitat choice is determined by the availability of food sources. In case a shortage of food occurs, many species of the insect migrate in order to look for fresh sources. The following discussion reveals interesting information regarding what do grasshoppers eat. 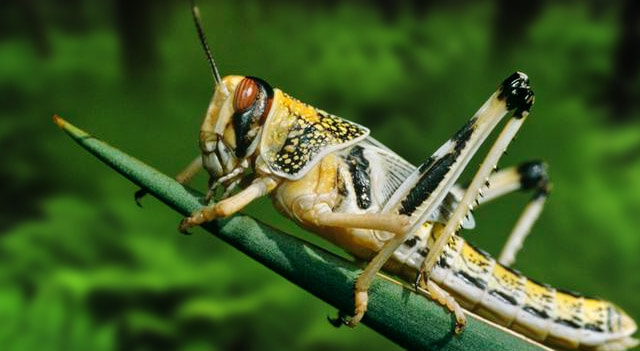 According to scientific classification, grasshoppers are placed in the following groups depending upon their feeding habits.

The majority of grasshopper species exhibit herbivorous behavior. Their most preferred type of food is grasses as well as cereal crops. The insect possesses strong mandibles which help it chew the tough fiber which is found in grasses and other types of plants. In addition, its salivary glands release enzymes which help in the chemical digestion of the plant into simple carbohydrates. Interestingly, grasshoppers can even digest the driest grass.

Although the favorite food of grasshoppers is grasses, they may also turn to other types of plants. Leaves, shrubs, vegetables and a variety of other plants make up the diet of the insect. For this reason, it is termed as polyphagous – a group of organisms which obtain food from multiple types of plants. Typically, other than grasses, a grasshopper feeds on vegetables like lettuce, broccoli, wheat, barley, carrots and beans.

Camouflaged among fresh green plants or dry grasses, the green, yellow or brown colored grasshoppers are commonly thought of as exclusively herbivorous. However, many species of the insect also exhibit omnivorous behavior and feed on animals. In particular, during the shortage of plant food sources, a grasshopper may turn to the flesh of other small insects or animals. It has also been observed to obtain nutrition from the faeces of animals. However, their omnivore classification does not make grasshoppers dangerous to humans.

The question, “what do grasshoppers eat” has already been answered in the above discussion. However, there are more details about the diet of the insect. Young grasshoppers obtain nutrition from food sources which differ slightly from what the fully grown up insect prefers. Known as nymphs, baby grasshoppers do not yet have fully developed digestive systems for the digestion of tough fibrous plant material. In addition, the strength of their mandibles is also not as high as in the case of adults. For this reason, these small nymphs feed on tender parts of plants which are easy to chew and digest. Their common sources of food include fresh shoots, clover and fresh grasses.

Since babies do not have wings, they cannot fly around like their grown up counterparts in search of a variety of fresh supplies. Therefore, their food sources are limited to the available vegetation.

Nymphs do not show omnivorous behavior and they feed exclusively on plant matter. As they begin growing through the process of molting, they grow bigger in size and develop stronger molars. Gradually, the wings also develop. These young grasshoppers then begin moving around and turning to other food sources which are preferred by the fully mature adults as they can now digest tougher vegetation.

As already discussed above, adult grasshoppers can feed on any type of plant matter as well as small animals. However, their primary sources of food include fresh or dry grasses, cereal crops and plant leaves.

Adult grasshoppers are well-adapted not only to digest a wide variety of plant material, but also for dealing with population pressure. Unlike other types of animals which fight for food in case of competition, grasshoppers unite together and use their strength to devastate large spans of vegetation covered areas. These formidable groups of insects are called locusts. A locust differs slightly from an adult grasshopper in its physical traits and eating behavior. It is bigger in size and requires a greater amount of food. It, therefore, eats more and groups of locusts can destroy vegetation. In fact, locust plagues have caused famines in the ancient world as well as in the modern day Africa.

A locust develops in response to overpopulation of grasshoppers. As one grasshopper rubs its legs against the other one owing to over crowdedness, it stimulates the production of a chemical which turns a harmless grasshopper into a hostile locust by bringing about certain physical and behavioral changes in the insect. Swarms of locusts fly to areas containing large amounts of vegetation. These areas often include agricultural land where commercial crops are grown. Every year, farmers face a huge loss due to destruction brought about by these locusts.

Grasshoppers contain a simple digestive system which enables them to breakdown the ingested food and obtain nutrients from it. Food takes a passage through the following important parts of a grasshopper’s digestive system.

Food is taken in through the mouth where the insect’s mandibles crush it and carry out its physical digestion. In response to this food, the salivary glands present in the buccal cavity of the mouth release saliva which contains important digestive enzymes. This enables chemical digestion to begin in order to break down food and release carbohydrates which supply energy to the organism.

The oesophagus is tube which provides a path to the partially digested food during its movement from the mouth to the crop.

As in many other animals, the crop serves the purpose of storing food before it goes on to the other parts of the alimentary canal for further digestion. Some chemical digestion also occurs in the crop.

The gizzard of a grasshopper is an important organ which further digests the food. It consists of thick muscular walls which perform the function of grinding up the food particles. This helps in breaking down all the tough tissue found in the ingested plant matter.

The ground up food enters the stomach from the gizzard. Here, the final chemical digestion takes place.

These tubules are present at the junction formed between the mid-gut and the hind-gut. These tubules add uric acid and urea to the digested matter in the gut before it is excreted out of the body.

The ileum is the part through which the digested nutrients pass into the blood stream. The undigested matter is passed on to the colon where water is reabsorbed, forming the faeces. 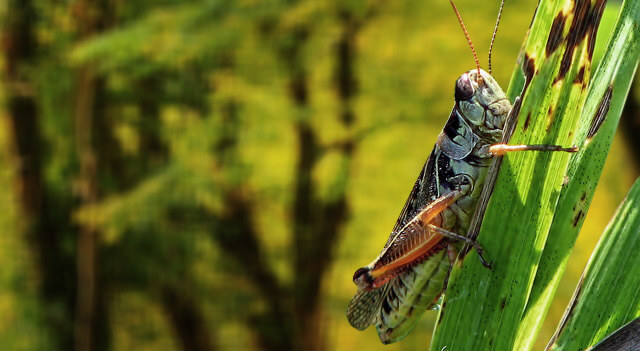 Grasshoppers have developed very interesting adaptations for obtaining nutrition. This enhances their chances of survival during unfavorable conditions, such as shortage of food or competition. Although they have an extremely short lifespan of just a year, these adaptations help each individual grasshopper complete its lifespan instead of dying before this period.

Discover more information about these fascinating adaptations through the following discussion.

In a nutshell, grasshoppers are opportunistic feeders. Nature has bestowed them with the ability to feed on a wide variety of food sources. In addition, their fascinating adaptations further help them in obtaining nutrition and avoiding starvation. The above discussion, therefore, answers the question “what do grasshoppers eat” in a comprehensive way.