Chimpanzees are two Ape species which fall under the genus Pan. These two species are known as Pan Troglodytes and Pan Paniscus in scientific language. As apes, they are classified as mammals and primates in the family Hominidae. The other members in this family are gorillas and orangutans with humans being their closest relatives as both make up the Hominini tribe. They evolved only 4 to 6 million years ago from a common ancestor.

Chimps are popular as intelligent animals. They are rather noisy and active as well as social with each other. They are one of the main attractions for animal lovers in zoos all over the world. In the wild, they are found in wet savannas as well as rain forests of Africa. They have been discovered in twenty one different countries of the continent. Their range extends beyond thick forests to open savannahs with swamps, woodlands and bamboo forests also being home to them. 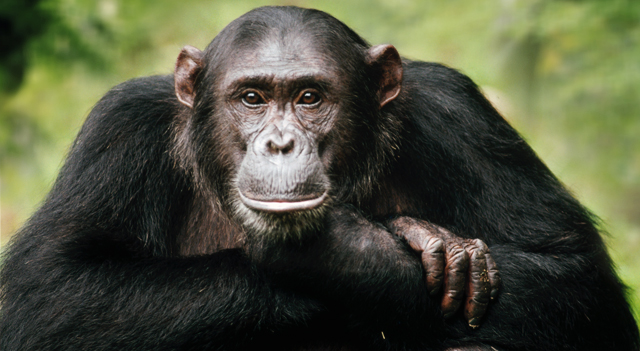 Read the interesting chimpanzee facts below and enhance your knowledge about the animal world:

Look at different chimpanzee pictures and notice their interesting physical traits. The unique characteristics which can be observed in photos are discussed below:

These mammals are omnivores. Therefore, chimpanzee diet comprises of both plants as well as small animals. They prefer to eat fruits, seeds and nuts. However, they may also feed on the leaves and stems of plants as well as the bark of trees.

On the other hand, their meat preference revolves mostly around insects, such as termites, ants and even lice. However, they also hunt down small animals, such as monkeys, to appease their hunger. Other than that, they also eat eggs of animals.

Their hunting activity is quite fascinating as they do not roam around with the aim to simply bump into a food source. In fact, their amazing memories and intelligence help them remember where to go exactly to find food.

Apart from being a source of nutrition, plants may also serve as medicines for chimps. For instance, these mammals often eat certain types of plants to cure an upset digestive system or get rid of parasites in the intestines.

The chimpanzee habitat consists of twenty-one countries found in the middle of the continent of Africa. The area includes thick rainforests, savannas and wetlands. On the other hand, these mammals have also been found in drier regions with comparatively less vegetation, such as the grassy plains of Africa. Overall, their occupied region extends from Africa's west coast and extends all through the huge central African region of Congo and further goes up to Uganda, Tanzania, Rwanda and Burundi in the west. These areas provide home to chimps as they can find food here and hide from their predators. However, just as in the case of other endangered animals, the home of chimps is also being confined to smaller region due to rapid destruction of forests.