Hippopotamus is a sub-aquatic animal and exists mostly in Africa’s sub-Saharan region. Its two species are known as H. amphibius and Choeropsis liberiensis according to scientific nomenclature. The bulky animal is next to elephants and rhinoceros in size and, therefore, earns the title of the world’s third largest ground mammal.

Hippos are as old as fifty-five million years when they first evolved. Scientists relate them to cetaceans, such as Whales and porpoises which are their evolutionary ancestors. The earliest fossil evidence of these large organisms is sixteen million years old. It belongs to Kenyapotamus genus.

On average, the formidable mammal measures around thirteen feet in length and five feet in height. It can be as heavy as three and a half ton. It is interesting how the animal’s enormous body is supported by its short and squat legs.

Another amazing quality of hippos is their surprisingly fast sprinting speed. Although they are bulky, they can easily overtake humans while running. Speed of thirty Km /hour has been recorded.

They seem to be calm creatures, lying peacefully in a water body. Beware: this is an extremely deceptive image of hippos. They are actually very aggressive and do not like intrusions. Therefore, do not fancy having a close look at them if you are out somewhere near their habitat. 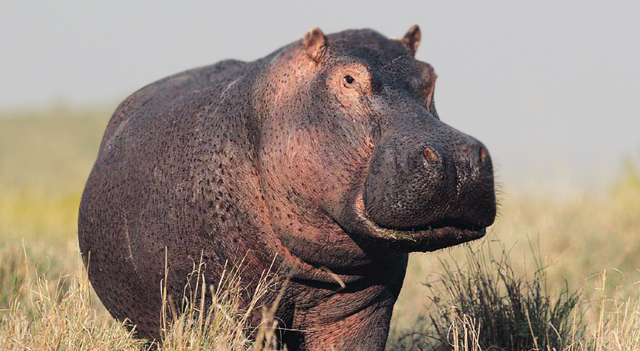 A hippo family consists of a group of around fifteen members with a large male being the dominating head. They stay in the same water body together. During times when scarcity of water occurs, other families may join them, making their water body crowded.

The male hippo has dominance over all female members of its family. Other intruding males are scared off by revealing the formidable canines. This warning sign may also be followed by actual fights.

The females are mostly involved in raising the young hippos. They spend eight months of gestation period. Birth usually takes place in the rain season. The mother teaches its calf to swim and protects it from predators, such as crocodiles and lions. Even adult hippos sometimes attack the babies.

Hippopotamus pictures can show you all the physical traits of this huge animal, yet interesting mammal. While looking at these photos, do observe the following features.

Of course, photos cannot reveal much about their behavior. Instead, you can look up for some videos related to hippos on the internet. Even better, you can observe them in a zoo where they are kept in large enclosures in a habitat which is close to their natural one.