For a long time, panda was considered to be the member of raccoon family. However, genetic research has revealed that these adorable and cuddly animals are actually bears of the family Ursidae. In the scientific world, panda bears are known as Ailuropoda melanoleuca which literally means, "black & white cat feet". Their resemblance to cats lies in their slit like pupils, giving their eyes a feline appearance. For this reason, the Chinese call these native animals Da Xiong Mao, meaning, "giant bear cats". Most people recognize these creatures as possessing white fur with black patches as you can see in the panda pictures. However, there is another type of this cute creature with a reddish-brown coat of fur and white patches.

Here are some fascinating panda bears facts to improve your knowledge about this beautiful creation of Nature. 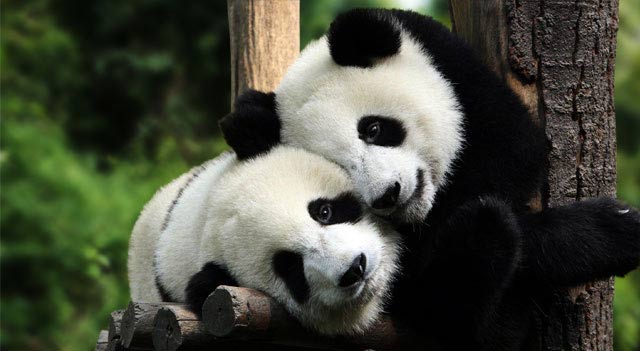 Other than leopards, which mostly attack the cubs, humans are their only predators. Unfortunately, the hunters have caused the numbers of these beautiful animals to dwindle quite rapidly. Today, the mountain forests of China are house to only a thousand to fifteen hundred of these cute creatures. Breeding centers and zoos in different parts of world contain hardly a hundred of them.

Pandas are the animals fall in the category of Mammals. According to their class, they are considered as carnivores, however they have an omnivore digestive system and rely on meat and plants for food... Read More ->

Giant panda is a beautiful black and white animal. This rare species is found in the mountain ranges of Westren China but mostly these types of animals are habitant in north Qinling and west Minshan Mountain Ranges. They are very rare on the earth... Read More ->

Red Pandas Facts Belonging to the order carnivore and family Ailuridae, Red Panda are from the mountainous regions of the world. (Ailurus fulgens) red panda is a native species of panda family found in Himalayan mountain range of different countries... Read More ->

Largest Panda In The World

Giant pandas are the largest panda in the world. Known for their patched furry skin, they are usually found in limited areas of Central western and south-western China. Compared to their red furred siblings, giant panda normally live in high mountains or isolated parts.. Read More ->

Smallest Panda In The World

The red or lesser pandas are the smallest pandas in the world. Their size is like a large domestic cat or a small dog. The figures recorded about their size are; head and body lengths up to 60cm and tail length up to 48cm. Normally they weighs about 45Kg... Read More ->