Everywhere in the natural universe, you can witness a great amount of variety and diversity, and the same is the case with the family of the foxes which have a number of species and sub-species. Though there have been listed as many as 37 species of the foxes, but only 12 of these belong to the genus "Vulpes" and are termed as the true foxes. However, the best known of the fox species include the red fox, fennec fox, gray fox, kit fox, swift fox, and so on. The fossil findings reveal that this delightfully attractive animal has inhabited the planet earth for millions of years. Here follows a brief description of various commonly known types of foxes, including their distinctive traits, feeding habits, mating behaviors, and the like: 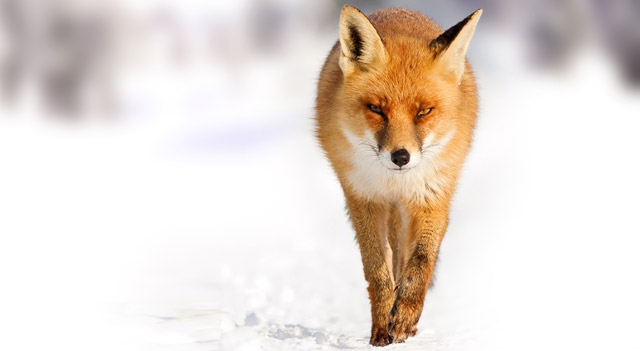 It is a very commonly known species of foxes which is the most widespread and can be found almost everywhere across the northern hemisphere, including Northern Africa, Asia, Europe, and North America. This famous type of foxes derives its name from the gorgeous red coloring of the feathers on its body. It is the largest member of the true foxes and can easily be distinguished from its relatives on the basis of its comparatively bigger size, measuring up to 56 inches in overall body length. Another peculiar characteristic of the red foxes is that they have capability to adapt to the new environments very quickly. Despite the serious concern that foxes are harmful for the native populations of certain birds and mammalian species in Australia, they have been introduced in the country in the recent past. Owing to its quick adaptation of the Australian lands and the danger posed by it for other animals, the International Union for Conservation of Nature has listed it in the Global Invasive Species Database as one of the "world's 100 worst invasive species".

You have already come to know that the red foxes are the largest among the true foxes; here you are to be acquainted with the fennec foxes which are the smallest of all the fox species. Found in the Sahara of North Africa, it is extremely small in size, not more than 16 inches in overall body length, with unusually large ears which assist in the dissipation of heat in the sizzling summer season. The tails may extend for up to 12 inches, while the ears can be as large as 6 inches. In addition to ears, certain other parts of this animal's body, including coat and kidneys, are perfectly adopted to the low water and high temperature desert environments that they inhabit. Their fluffy cream color coat efficiently deflects the unbearable heat during the day, as well as serves to keep the animals warn during the night. Enjoying the lifespan of approximately 14 years in captivity, they are also famous for their social behavior as there exists strong bond between the individuals of the mating couple who bring up the young with collective efforts and the cubs of the previous breeding season remain with the family even after the birth of a new litter.

Though they have also been found to have black and white colors on their body, the gray foxes derive their name from various shades of gray coloration. Considered to be one of the most primitive living canids, it is scattered across different parts of the North and South American continents and is also found in eastern part of the globe. In order to distinguish it from the related species, you have to look for its black-tipped tail, strong neck and the grizzled upper parts. In addition, the widely separated temporal ridges, forming a U-shape, is also considered to be one of its distinguishing physical traits. In their overall body length, the gray foxes measure up to 45 inches including the tail. Here it is worth noticing that the capability of the red foxes to climb trees for the sake of escaping predators is shared only with the Asian raccoon dog among all the canids. Being omnivores, they feed on both the vegetation and meat diet and, for hunting, they look for the eastern cottontail, birds, shrews, voles, brush rabbits, jackrabbits, and so on.

Inhabiting the western grasslands of the North American continent, this light & small fox is a bit bigger than that of a fennec fox and measures the size of a domestic cat. Belonging to the genus Vulpes, it grows for up to 31 inches in total body length, while the color patterns include dark, grayish, tan, yellowish tan, pale yellow and white. Concerning their body weight, they may measure up to seven pounds. Though both the males and females are quite similar in appearance, the former usually have bigger bodies than those of their female counterparts. Their favorite habitats include the short-grass prairies and deserts, where they make dens in the sandy soils in the open areas, the plowed fields and along the fences. Though once considered severely endangered, the swift foxes have been reintroduced in Canada, but the country's Species at Risk Act lists them as endangered species. However, their population is quite stable in the United States where they still occupy 40 percent of their historic range and the International Union for Conservation of Nature (IUCN) gives them the status of 'least concern'

This North American fox species shares the genus (Vulpes) with the swift fox, whereas the desert kit fox is considered to be a sub-species that lives on the open desert and among the sand dunes. Owing to its extremely small size, the kit fox is also considered to be among the smallest species of the foxes, with the maximum body length of 21 inches. Much like the fennec fox, it also has got very large ears that, along with rendering it exceptional hearing potential, help it lower the body temperature by dissipating extra heat. Though the body color patterns include rusty tones, gray coat and black tip to its tail, but unlike the gray fox it does not have a stripe along the length of its tail. Moreover, for the sake of distinction, you can locate peculiar dark patches around the nose of the animal. It is a nocturnal animal and goes to hunt shortly after the sunset, but sometimes the kit fox ventures out of its den during the day. It is primarily carnivorous and feeds on meadow voles, lizards, insects, fish, snakes, ground-dwelling birds, cottontail rabbits, kangaroo rats, black-tail jackrabbits, and so on. In case of the scarcity of the prey, it opts for vegetarian mode of feeding and consumes tomatoes, cactus fruits and other fruits.

Particularly attractive for its beautiful white fur coat that blends with the snow in winter, it is native to the arctic regions of the Northern Hemisphere and is also known as the white fox, snow fox or a polar fox. On the basis of its short, thick ears, short muzzle & legs, and generally rounded body shape, it has a low "surface area to volume" ratio. So surprisingly, the deep thick fur coat of the arctic fox turns brown in summer and white in winter and it is this efficient protective coating that makes its survival possible in the extremely cold environments. Though the average length is about 33 inches, occasionally it may grow as long as 44 inches including the tail-length. However, the females are not only lighter in weight than their male counterparts but are also smaller in size. Regarding their dietary behavior, the arctic foxes use to eat any small animal that they can find, such as, hares, lemmings and voles. Additionally, it has also been discovered that in case of the scarcity of the food, they even go for the eggs and carrion, where the latter is the decaying flesh of the dead animals.