What do Giraffe Eat?

Giraffe and its Diet

A giraffe, also known as Giraffa camelopardalsi, is an innocent herbivore. It harms no animals and feeds peacefully on plant material. In the animal kingdom, it is popular as the tallest mammal. Its long neck extends to almost six feet and helps it reach out to the branches of trees easily. It eats leaves, buds, shoots as well as shrubs found in the savannahs and grasslands of eastern Africa. Its other sources of food may be fruits, roots, seedpods, twigs and even dry and spiky thorns. It also feeds on the leaves, fruits and shoots of apricot trees. This answers the question, what do giraffes eat. Unlike elephants, however, these tall and large mammals do not end up destroying vegetation as they feed.

In certain regions of its habitat, the salty soil is a rich source of minerals. In such areas, the Giraffa camelopardalis also feeds on the soil to fulfill its body's nutritional requirements. 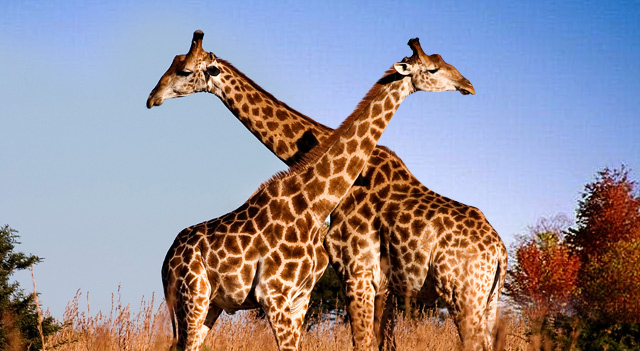 After finding out what do giraffes eat, it is also interesting to discover how they feed. Nature has bestowed these mammals with certain adaptations which help them eat from tall trees and fulfill their need for energy and nutrients.

As mentioned above, the animal is a ruminant. In fact, it is the largest of all ruminants. It possesses more than one stomach for better digestion of the plant matter that it feeds on. As it eats large amount of leaves, shoots and twigs, it consumes high quantities of tough fiber and lignin. These are first broken down and softened in the first stomach and passed on to the next one for further softening. The process is repeated in the other stomachs till the time the food is digested properly through chemical breakdown and the nutrients are absorbed into the animal's blood stream.

Have a look at the giraffe facts concerning their diet and feeding habits which are truly fascinating.

For the populations of Giraffa camelopardalis to come out of endangerment, humans should stop destroying the food sources found in their habitat.