Based on the statistics released by the Census of Marine Life in 2011, there are about 8.7 million extant species of organisms inhabiting the terrestrial and marine environments on the planet Earth. Out of these, about 6.5 million are found on the land, while the remaining 2.2 million are the aquatic creatures, living in oceans. The purpose of giving these statistics is to tell you that some of these living beings are extremely fascinating in look, human friendly and very beneficial to man, while the others are somewhat gruesome and dangerous. Among the latter, you have a heinous gigantic beast, known as python, that is famous for its ugly and fearsome eating habits. This unusually large and one of the deadliest snakes in the world can engulf the whole of an animal, like hen, dog, goat, cat, sheep, deer, kangaroo, springbok antelopes, alligators and even their owners (humans). It is very unfortunate fact that some people love to have pythons as pets, but later on they only have to repent over the loss of their friendly and the dearest pet animals. Sometimes, even the owners themselves fall victim to their cruel nature and get seriously hurt or lose their lives, as a consequence of the fierce attack of this fierce reptilian species. 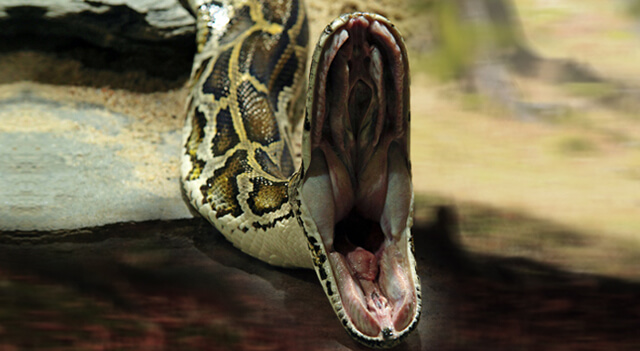 If you want to witness the deadly and brutal nature of pythons with your own eyes, just have a look at the python pictures and videos available all over the internet. In this way, you can see how a large living animal is quickly engulfed by this horrifying creeper. You will be amazed to see their extra large body which may often reach upto the length of up to 50 feet, while measuring nearly 980 pound, or 70 stone in weight. If you have a look at one of the world's largest snakes, African rock python (Python Sebae), you will come to know that it has a thick body with colored blotches, which often join in a broad irregular stripe. Fading to white color on the underside, the body markings usually vary between, chestnut, olive, yellow and brown. Its triangular head is marked, on the top, with a "spear head", that is colored dark brown and is outlined with the buffy yellow shade. In addition, you will also be able to make distinction between the males and the females on the basis of their size, as the former are smaller than those of latter.

Described below are some of the most stunning python facts, which you might not have heard of ever before. These amazing realities will not only add to your knowledge, but will also serve as a source of entertainment for you. So, let's go ahead!