Typically characterized by their lizard-like appearance, blunt snouts and slender bodies, there are about 655 extant species of salamanders, while many other have already gone extinct. Their short limbs project at right angles (90o angles) to their body and are used for quick movement on ground. Concerning their distribution, the entire population of salamanders is restricted to the northern hemisphere of the globe. Almost all the surviving species have never been found to have over 4 toes on the front legs and over 5 toes on the rear legs. In other cases, some species have fewer digits on their limbs, while the others do not possess hind limbs altogether. Owing to the permeable nature of the skin, they can easily survive in watery habitats as well as damp places. It has also been found out that some of these amphibians spend entire life in water, and some others are restricted to terrestrial environment. Nevertheless, you can still find some that inhabit water in their larval stage, and their adult stage is spent solely on ground. In the phylum chordata, they have the unique characteristic of regenerating their lost limbs and other body parts if these have been damaged. 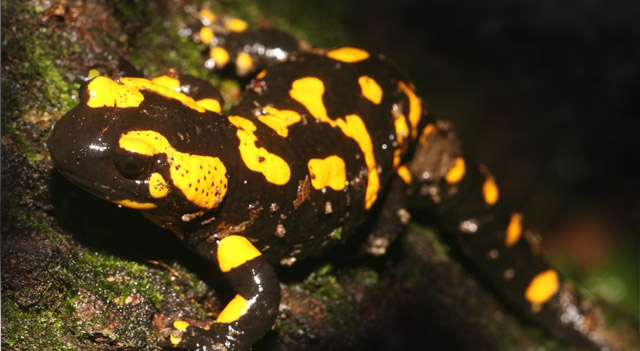 As you look on the salamander pictures, over the internet, you will come to know that some look quite attractive, while the others have got ugly appearance. The amphibians, belonging to the family Salamanderidae, are commonly termed as 'newts' and their distinguishing feature is the absence of costal grooves along the body sides. The newts have got warty or velvety skin that is wet to the touch, and the members of other families have moist and smooth skin that lacks scales. Some have drab skins, whereas others possess brightly colored skins that also exhibit various patterns of stripes, dots, blotches, spots and bars.

What do Salamanders Eat?

Either you are going to keep them as pet animals or not, it will be very useful for you to know 'what do salamanders eat'. Here follows the answer. Being carnivorous amphibians, they rely on insects and other such creatures for their diet. Salamanders living on terrestrial environment have got sticky tongues like those of their relatives, i.e. frogs. They catch the prey by shooting out their tongues from a certain distance. The variety of prey that these land dwelling species consume includes slugs, worms, spiders, dragonflies, centipedes, frog eggs, insect eggs and other small invertebrates. The aquatic species, on the other hand, prey on frogs, mosquito eggs, leeches, tadpoles, small fish, and so on. In case, you are going to feed terrestrial pet salamanders, it is quite easy as all the items of their diet are easily available on the pet stores, such as bugs and worms, etc. But for aquatic pet species, you need small fish, earthworm, brine shrimp, and the like.